RPG developed by Xtalsoft in 1986. It was developed for home computers and later ported to the Famicom Disk System.

Aspic is an RPG that adopts the then common old-school method of combining third-person overworld exploration with first-person dungeon crawling, such as that used by the original Phantasy Star.

Battles in the game are set in a separate real-time mode where the player must attack, jump and block the enemy's attacks in order to win. Occasionally, the player can convince an enemy warrior to join them in their quest; when this happens, the now friendly unit fights in the hero's place for a while.

Though the game began life as a PC game for various Japanese home computers, it was eventually published on the FDS by Bothtec in 1988. Despite the increased abilities of the Famicom over the older PC systems for which it was originally made, the game was largely untouched except for a graphical update. 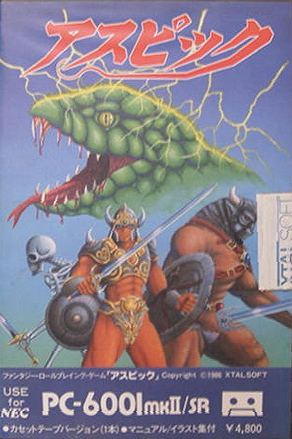