Valkyrie Profile 2: Silmeria was developed by Tri-ace and was released for the Playstation 2 in the United States on September 26, 2006. The game follows up the cult classic JRPG Valkyrie Profile.

Valkyrie Profile 2: Silmeria, continues and substantially builds upon the same rich gameplay that the first game was known for. Unlike many other JRPGs, Valkyrie Profile 1 and 2's dungeon and town exploration takes place on a two dimensional plane similar to a sidescroller. The levels are designed with elements of two-dimensional platforming and puzzle games, in addition to the enemies that roam around and trigger battles if touched. The main character, Alicia, is the only visible party member when exploring, and she is able to jump, shoot photons, and swing her sword. Enemies appear in each of the game's dungeons, and Alicia can hit them with her sword for a preemptive strike, giving her a full AP gauge when the battle begins. If Alicia otherwise comes into contact with an enemy, there is a chance that the enemies will get to act first, resulting in the player starting the battle with an empty AP gauge.

Alicia has the ability to manipulate photons (similar to Lenneth's ability to manipulate crystals). Photons can be used to create temporary inanimate objects out of enemies in the two dimensional environment, enabling the player to use frozen enemies as platforms or simply to avoid them, if desired. If a frozen enemy or object is hit by a second photon, Alicia will instantly swap positions with that thing, opening up more possibilities for platforming and puzzle-solving.

Alicia can also gather Sealstones, which are items with unique special effects, in the games numerous dungeons. While carried, Sealstones apply their effects to the player's party. If a Sealstone is placed on a pedestal in a dungeon, it will apply its effects to all enemies within that surrounding area of the dungeon. Sealstones can also be deposited in one dungeon and then pulled out in another, allowing for many possible applications. In this way, the player can hold Sealstones to gain beneficial effects for their party while carefully placing Sealstones in dungeon areas containing difficult enemies to weaken them. Initially, the player can only carry one Sealstone at a time, but more slots can be unlocked by completing certain sidequests.

Crafting is a major new element in the game. Merchants throughout the game have a handful of special stock that can only be purchased after selling the necessarily materials to him. Materials can be equipment, consumable items, or ingredients gained from fighting monsters. Each monster has breakable parts, such as a tail, horns, wings, or a carried weapon. When such a part is broken off in battle by the player's party members dealing sufficient damage to it by physically striking it, there is a chance of the player receiving an item. Each monster has exactly one possible item for each of its breakable parts. Some parts are harder to break off than others, as they may be small or difficult to reach with most attacks, so a player seeking to break certain enemy parts should consider the hit box of their characters' selected attacks and the resultant combo they intend to perform to ensure that they manage to connect their hits on the enemy part sought.

Optional additional party members can be found in the many villages and dungeons in the form of inanimate objects whose attached spirit Alicia can materialize into Einherjar. The character class is fixed, but oftentimes the individual character you obtain is randomly selected from a pre-set list with up to 4 possibilities. These Einherjar can also be "released" once they've gained a few levels, which rewards the player with rare stat-boosting items according to a couple of factors, including how well-equipped the released Einherjar was.

Unlike the first game, there are no "periods" or time limits for progression. Chapters end after specific story moments are reached rather than at the player's press of a button. Overall, the game is more linear than its predecessor.

Whereas the original Valkyrie Profile had three difficulties (Easy, Normal, and Hard), Valkyrie Profile 2 does not allow the player to choose the level of challenge. Rather, the game becomes increasingly difficult with each successive playthrough. No progression, such as items or character levels, carry over from one playthrough to the next as in New Game+; and there is no new content unlocked only in successive playthroughs, so the only difference is that enemies get stronger.

The Seraphic Gate, an optional super dungeon, returns from Valkyrie Profile 1. This time, it is accessible in the later half of the main game rather than only from the main menu post-completion, and the player can travel back and forth between it and the main game at various times. As in VP1, the best weapons, the hardest bosses, and some special party members are only found in the Seraphic Gate.

The first noticeable aspect is that the game uses a 3-D field with 2-D aspects. Both you and the enemy have a radius around you detailing where you can attack. Another thing worth noting is that you are in complete control of the combat. If you aren't moving, neither is the enemy and the enemy will only move when you are moving. Also the system got an overhaul in the sense that your whole party has a meter at the bottom of the screen of 100 AP. Each character in your party when they attack, use a specific amount of AP points. If you run out, you can't attack. The meter can be recharged by moving around or using a specific item to recharge it.

Each of the 4 characters are mapped to a button and pressing their corresponding button will cause them to execute their abilities based on a preset rotation (freely customizable outside of combat). Every attack has their own timing and lift/push properties associated and when properly used in tandem can even refund AP lengthening the turn and multiply the XP gain. AP falls off the enemies in the form of balls and XP in the form of crystals for lift and down attacks respectively.

You can also target specific body parts on the enemy and if you cause enough damage to an specific spot without killing the enemy's overall HP, you can break it off giving you a chance to get various items that are necessary for learning new skills and creating new weapons.

Another player can participate in the battles if a second controller is connected.

Valkyrie Profile 2 takes place hundreds of years before the events of the first game. The protagonist is Alicia, the first princess of the kingdom of Dipan who shares her body with a second soul, a Valkyrie named Silmeria. Silmeria is one of the three Valkyrie battle maidens who act as Odin's agents on Midgard, the world of humans. Odin, who rules Asgard, the world of the gods, primarily uses the Valkyries to collect the souls of fallen humans and send them to Valhalla to serve as soldiers in his army. After serving Odin faithfully for a long time, Silmeria began to doubt his rule, and after a certain incident, she rebelled against him. As punishment for her insubordination, Odin invoked the Sovereign's Rite to transmigrate Silmeria's soul from Midgard to divine slumber and summoning the next battle maiden from slumber to replace her. But, unbeknownst to Odin, the spell used to transfer Silmeria's soul was not completed properly and she was instead stowed away inside the body of the young princess Alicia.

Silmeria has spoken to Alicia since Alicia was young, trying to prepare her for what will happen when Odin finds out Silmeria's soul resides within Alicia's body. Silmeria also sometimes takes possession of Alicia to act directly when she feels the circumstances warrant it. These outwardly inexplicable self-conversations and personality shifts have led many other people to believe Alicia is insane and the king banished her while still a child to a small palace outside of Crell Monferaigne. When Odin eventually does become aware of Silmeria's existence inside of Alicia he immediately dispatches the ruthless Valkyrie Hrist to bring Silmeria back to Valhalla. Alicia and Silmeria fight back and escape. Hrist threatens that Alicia's home, Dipan, will now suffer the gods' wrath in her stead. This is where the game opens. 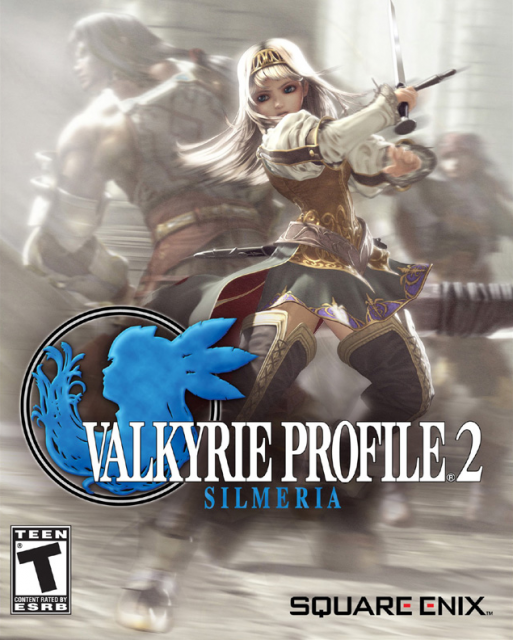