The second game in the Castlevania series, Vampire Killer has the player taking control of Simon Belmont in his quest to defeat Dracula.

Vampire Killer, known as Akumajō Dracula (悪魔城ドラキュラ, officially translated Devil's Castle Dracula) in Japan, is a Metroidvania-style platform-adventure game produced by Konami and released in 1986 for the MSX2 computer platform in Japan, Europe, and Brazil. It was never released in North America. It was in development around the same time as the Nintendo Entertainment System (NES) game Castlevania, which shares the same title in Japan.The MSX2 version of Akumajō Dracula was released in Japan on October 30, 1986,a month following the NES version,making it the second game in the Castlevania series.

In contrast to the more traditional platformer gameplay of the NES Castlevania, the MSX Vampire Killer was instead a more open-ended platform-adventure. The game's non-linear design had a similar structure to Metroid released just several months before it. Vampire Killer laid the foundations for the open-ended, Metroidvania-style, platform-adventure gameplay later seen in the 1987 title Castlevania II: Simon's Quest, 1997 title Castlevania: Symphony of the Night, and most 2D Castlevania games following it. 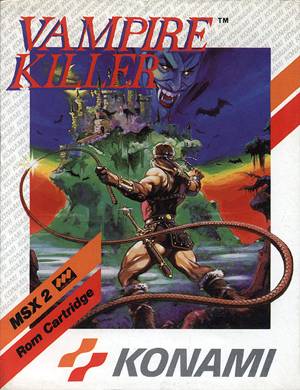