A Japan-exclusive crossover fighting game for arcades and the Wii, pitting warriors from Capcom's line of video games against superheroes from animation studio Tatsunoko Production.

Tatsunoko vs. Capcom: Cross Generation of Heroes is a 2.5D tag-team fighting game developed by Eighting and released by Capcom for arcades (running proprietary Wii-based arcade hardware) exclusively in Japan on December 11, 2008. It was also released for the Wii in Japan on the same day.

It is a crossover fighting game in a similar vein to the Marvel vs. Capcom series, featuring characters from both game publisher Capcom and animation studio Tatsunoko Production. Like other Versus games, battles are one-round tag-team affairs, with players having the ability both to switch between fighters on-the-fly and to team up for powerful combination attacks. The Wii version features bonus unlockable content (including characters and costumes) and bonus multiplayer mini-games.

The game later received an enhanced version in 2010 for the Wii, titled Tatsunoko vs. Capcom: Ultimate All-Stars. Released worldwide, this version revamps both the character roster and balance while replacing the mini-games with a new "Ultimate All-Shooters" mini-game.

Two of the playable characters (Gold Lightan and PTX-40A), as well as final boss Tokoyami no Sumeragi, are considered "giant" characters and can not be played with a tag-team partner.

Ken's mini game is a shooting gallery, you shoot using the A button and reload by pointing the Wii remote's IR pointer outside of the screen and shoot. On screen will be 2 rows of pods out of these pods will pop enemies and some of the playable characters whenever you hit one of the enemies you get 500 points but when you hit one of the playable characters you will get minus 500 points. After a while a small flying creature from the Science Ninja Team Gatchaman series will start to fly around on screen shooting him will grand you 2000 points. Once shot a new area behind the rear row will open, in there will be the antagonist of the series running around, when ever shot you gain 1000 points. The player with the most points at the end of the round wins.

Casshan's mini game is a dog race in which by pressing the A button as fast as possible your dog will run faster up to 200 KM/H (Which converts to FAST in miles) the first player whose dog reaches the finish wins.

Tekkaman is standing on his flying pod/mecha and you will have to make it go as fast as possible on a runway by shaking the Wii remote as fast as possible for a short period than when his pod gets at a certain point the runway its color will change and that is the cue to press the B button. If done correctly Tekkaman will throw his lance in a boomerang like fashion destroying enemies with it, the faster the pod went when he launched his lance the more enemies will die. The winner is the one who will have killed the most enemies.

Polimar’s mini game is a race. Swing the wii remote in a circle to make Polimar’s drill move forward, you have 10 seconds to try and get further than the other drills.

This minigame has you take control of Yatter-Wan. Yatter-Wan will race through a stadium and it is your job to stop it by pressing A before the finish line without going over. The closer you get the better your score.

Doronjo's minigame is like the end credit sequence. You take control of Doronjo and her henchmen on a bike and with three tries you have to try and collect as many coins as possible. There are numerous pits to jump over and bombs dropping from the sky to avoid.

Ippatsuman’s minigame consists of him throwing a baseball at a numbered board. Two meters will appear that determine where the baseball will be thrown. Pressing A to decide the length and swinging the wii remote to decide which height. You then have 10 baseballs to try and get as high a score as possible.

Jun the Swan's minigame is her free falling through the air. Using the dpad on the wii remote you have to direct Jun over the score bubbles to get points. You have 30 seconds to try and accumulate as many points as possible.

Hakushon Daimaou's minigame is a math game. Simple math sums will be shown on screen and using the wii remote you select the answer from a list of numbers. You have 30 seconds to try answer as many questions as you can.

This mini game is somewhat comparable to Capcom's Soki mini game, during 15 seconds ghostly enemies will advance towards Karas the player will have to slash them all by doing a slashing motion with the Wii remote, the player who managed to slash the most enemies wins the round.

Gold Lightan's minigame consists of you cleaning separate parts of him. You have 2 seconds to swing the wii remote and clean his arm, his leg, his chest and his head, the cleaner each section the higher points you will receive.

Ryu's mini game consist of throwing fireballs at objects, the fireballs are thrown by doing a stabbing motion with the wii remote. On the left hand side of the screen is a meter that fluctuates at variable speeds, the goal is the launch the fireball when the meter is at its top, the higher the meter the stronger the fire ball. Once an object destroyed another object will take its place. The object Ryu has to destroy vary from tree logs to submarines. The player who destroyed the most objects with the most powerful fire ball wins.

In Chun-Li's mini game you mash the A button as fast as possible to make Chun-Li do her lighting kick on a rock to sculpt a stone ryu out of it, the player who sculpted the most statues wins.

Batsu's mini game is a memory game that in order to play you hold the Wii remote like a classic NES controller. A code will appear on screen (made out of the four direction of the D-pad and the 1 and 2 button of the Wii remote) and it is up to you to copy it as fast as possible before the time runs out, did you happen to put in the wrong code or did not manage to input the code in time you lose one of your tree lives. The faster you input the code the more point you earn. As the game progresses the codes get longer reaching up to 6 digits. The player with the most points wins.

Morrigan will have (?) grabbed around the waist and its your goal to fly Morrigan as high up possible and to then slam (?) on a taget on the ground. You fly Morrigan by pressing "A" when a circle that comes from the left hits a bar on the right somewhat like a rhythm game. After a certain time Morrigan will dive towards the ground preparing to slam (?) on the target in order to hit the target you will have to time a button press. The score will be determined by the height Morrigan rose and if the target was hit. The player with the highest score wins the game.

Alex's mini game is basically the hammer throw. Alex will have to pick up a car by pressing B, once the car is picked up you swing the wii remote to build momentum and release by pressing B to throw the car across the screen.

Objects will be thrown at Soki and it is up to you to swing the Wii remote when the object is just about to hit him to slash your sword at it, the player who manages to destroy the most objects wins.

Viewtiful Joe's minigame consists of you trying to take a picture of him. He will run by quickly and you have three attempts to snap a picture when he enters the reticle on screen, the better the picture the higher the score you will receive.

Roll's minigame is bacially her running forward and you trying to avoid different obstacles such as boxes and moving servbots using the left and right buttons on the wii remote dpad, getting as far as possible will get you points as will cleaning up dirty spots on the floor. You have three tries to accumulate as many points as possible.

Saki Kanebou's minigame is a shooter. Using the wii remote to direct the crosshair and the A button to fire you need to shoot down as many rocks that fly towards you as possible, when your gun runs out of power you shake the wii remote to regain it. You have 60 seconds to get as many points as possible, sometimes gaint robots will fly towards you shooting them down will get you minus points. A gaint pig(?) will also fly towards you, shooting this down will grant you alot of points

Soki's mini game is somewhat comparable to the Karas mini game, fireball type enemies will advance towards Soki and it's up to the player to slash them all by doing a slashing motion with the Wii remote, you have three tries to score as many points as possible.

PTX's minigame is set in the Lost Planet universe, it is a scrolling shooter where players face off against the Akrid. You control PTX from an overhead view using the dpad to move and 1 and 2 buttons to fire, it has been expanded upon on the recently released Tatsunoko vs Capcom: Ultimate All Stars.

A number of unplayable Capcom and Tatsunoko characters make cameo appearances in the game. On the Capcom side, some of the appearances include Arthur from the Ghosts n' Goblins series In Kaijin no Soki's ending, Dr. Light in Roll's ending, and Silvia in Viewtiful Joe's ending. The Capcom character Devilot plays a prominent role in Doronjo's ending. 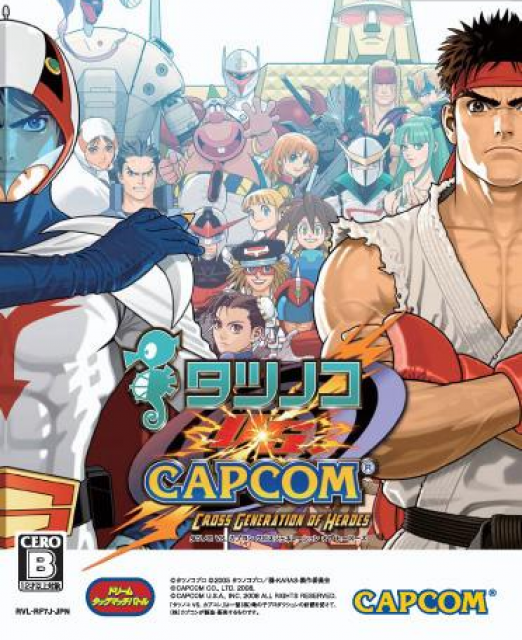