A comedic game where players use the PlayStation Move wand to slide around on office chairs and other vehicles and use Kung Fu skills to make some money while avoiding the Triad.
PlayStation 3

In Kung Fu Rider, players propel their character through the crowded streets of Hong Kong via office chairs,  vacuum cleaner s and other "vehicles" in order to evade the Triad that are out to get Karin and Tobio for overdue office bills. The objective is to obtain as much money as possible before getting to the shabby pick-up van waiting at the end of the course. Money is obtained by kicking, jumping, drifting, and ducking while speeding downhill. Kung Fu Rider features approximately 12 different conveyances to ride on through 26 courses. Some of the many include a luggage cart, a pink deer toy, miniature shopping cart, numerous kinds of office chairs and stools, and a warehouse hand cart.

Kung Fu Rider makes use of PlayStation Move (although it does not use subcontroller).

Motion is also used in co-op with the second player grabbing power ups along the way down the stage. 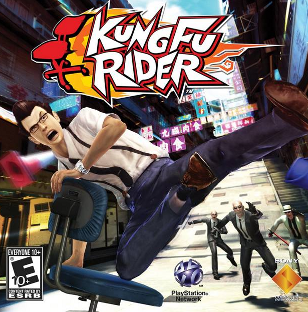