In Slam Bolt Scrappers, each team must attempt to build up their tower while preventing the other team from building up theirs. As a team's tower grows, it will gain attacks and defenses based on the blocks used to assemble it.

Players fly around the board and fight other players to kill spawning enemies that yield tetraminos (Tetris pieces) when killed. These pieces are needed to construct the players' towers. The color of each piece is based on the enemy it came from. When pieces fitted into a tower form a same-colored cube, they become an active piece based on their color. The larger a block is, the more power it has.

There is both a 4-player co-op campaign, and competitive multiplayer. 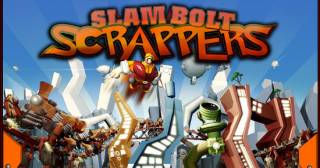