On March 16, 2010 a photo showing proof for a new entry in the Monster Hunter franchise was leaked from a Capcom press conference. A Japanese trailer was released shortly after, along with the official website. The game was announced for, and released on December 1, 2010 in Japan. There has been no announcement of a North American or European release, and is incredibly unlikely as of 2021. A fan translation which translates all the menus and much of the dialogue into English exists.

The game has been released as PSP Remaster title for the PlayStation 3 as Monster Hunter Portable 3rd HD Ver.

A large amount of strategic planning is required before hunters take on these quests, as very specific tools are often required to accomplish their goals. As hunters reach more advanced quests, they may want to team up with other hunters using weapons that compliment one another to take down the toughest monsters. Items earned from these quests are then taken into the village where, combined with materials gathered from your farm, they are turned into new equipment for your character to use.

Similar to the other portable entries in the series, Monster Hunter Portable 3rd multiplayer may be played by up to four hunters locally connected via adhoc. However, PS3 owners are able to link their PSP's to their home console and use a PSN downloadable program called Adhoc Party to connect with their friends. While the lack of true online play has caused a large outcry amongst series fans in the west, its inclusion has been seen as unnecessary for the Japanese market.

Unlike most RPG's hunters do not level up, instead becoming stronger through the forging of better equipment.

As hunters repeatedly kill or capture the same monster, they eventually will gather enough materials to create a complete set of armor based off of the monster they have killed. Beyond basic statistics of defense and elemental resistances, these armor sets confer passive bonuses to the wearer themed around the monster they were created from. For example, an armor set created from a monster that makes its home in snowy areas may allow the player to adventure in areas of extreme cold without penalty. Similarly, weapons forged from parts of a specific monster are likely to have special attributes appropriate to their origin. This most commonly manifests as elemental damage or the ability to inflict status ailments such as poison and sleep.

With stronger weapons and more durable armor, hunters are able to take on fiercer and fiercer foes. This allows them to make even more powerful weapons and armor which allows them to take on foes that are fiercer still. This cycle continues until hunters are able to slay the strongest of monsters, the elder dragon Amatsu Magatsuchi, and gather his claws, fangs, horns and scales. Hunters are likely to play hundreds of hours before reaching this point.

Monster Hunter Freedom Unite was the first game in the series to allow hunters to train felynes, cat mascots of the series, and take them into battle with you. This feature has been greatly expanded upon to include the following:

Even larger than the Pokke Farm, the Yukumo Farm brings back the mining, fishing, crops, honey and mushrooms from Monster Hunter Freedom Unite in addition to the following new features:

The felyne kitchen has been removed, with its responsibilities being taken over by the Yukumo Farm and the new sauna. From the sauna hunters can increase their health and stamina for the next mission, activate random powerups through drinks purchased from the felyne attendant, and mingle with hunters with whom the player has exchanged Guild Cards, sometimes receiving items from them.

With the return of all of the weapons from Monster Hunter Freedom Unite in addition to the new Switch Axe found in Monster Hunter Tri, Monster Hunter Portable 3rd allows hunters to wield any of twelve different weapon types. Damage calculation has also been simplified, making it significantly easier to determine whether or not one weapon is stronger.

Hunters are able to hunt and capture monsters from past games in the series in addition to several new faces. There are a total of 20 Small Monsters and 40 Large Monsters, for a grand total of 60 Monsters to hunt.

In addition, several existing monsters will be receiving new subspecies with altered characteristics including:

As with previous games in the series, hunters will track monsters across a number of different locations. Each locations is divided into a number of smaller zones separated by a loading screen. Most of the maps have been carried over from Monster Hunter Tri, some with significant changes. Unlike Monster Hunter Tri, however, resource gathering points are no longer random spawns but fixed locations similar to previous games in the series.

Downloadable quests, often with unique challenges, are available to hunters with internet access for their PSP. These quests commonly are cross-promotions with popular Japanese companies and properties such as Famitsu magazine and the anime Negima! Capcom currently has planned releasing going through May 6, 2011 as follows.

As part of their cross-marketing deal with Konami, the first Metal Gear Solid themed quest was released for download in Japan on Dec 24, 2010. Completion of this quest allows players to create the Felyne weapon "Solid Felyne Knife" and equipment, "Infinite Felyne Bandanya" and "Solid Felyne Suit." Quests to create male hunter armor based on Naked Snake and female hunter armor based on The Boss are planned for a later date.

Monster Hunter Portable 3rd is the only major Monster Hunter release to never receive a "G" or "Master" version as of May 2021. It is considered an extremely good beginner Monster Hunter game by the fandom due to its quick progression, comparatively simple gameplay, strong monster roster, quality of life improvements, and relatively short length for a Monster Hunter title.

A standard and collector's edition of Monster Hunter Portable 3rd were released on UMD alongside a limited edition PSP-3000 on December 1, 2010 in Japan. The collector's edition includes an adjustable Zinogre shoulder, wait and hip bag in addition to Zinogre in-ear headphones.

Special features of the limited edition PSP-3000 include:

No digital version of the game has been made available, nor has Capcom indicated they have any plans for one in the future. 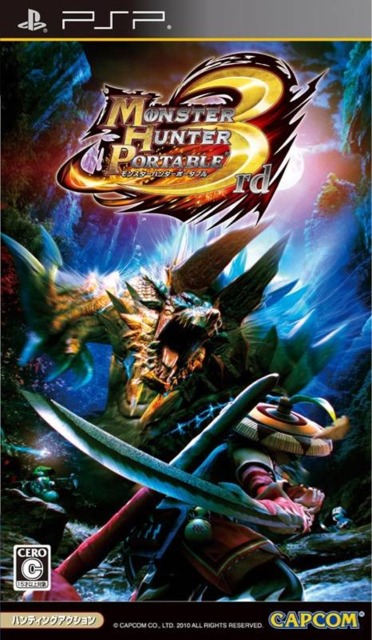