An isometric hack-and-slash arcade game from Data East, pitting four heroes against the forces of the underworld.

Gate of Doom (known outside of North America as Dark Seal) is a high-fantasy isometric hack-and-slash game developed and published by Data East for arcades in 1990.

Set in the fantasy kingdom of Etrulia, Gate of Doom puts a group of four heroes (knight Carl F. Graystone, wizard Freya Edirne, bard Riger Hawk, and ninja Kirikaze) against the forces of the underworld as they try to lock the titular "Gate of Doom" forever.

The game features two-player co-operative multiplayer and a unique magic system, where the current chosen spell cycles randomly every few seconds (as shown on a spellbook underneath the player portrait). The game later received a direct sequel, known as Wizard Fire (or Dark Seal II).

The game was later ported to the Nintendo Switch on February 15, 2018 and the PlayStation 4 on August 28, 2018, both digital releases by Flying Tiger Entertainment as part of the Johnny Turbo's Arcade series. This version was later included in the Switch compilation Retro Classix Collection #1: Data East on October 1, 2020 (as well as the 2-in-1 Pack with Wizard Fire).

On May 4th, 2010 the game was released on the Zeebo. This version was ported by Onan Games and published by G-mode. 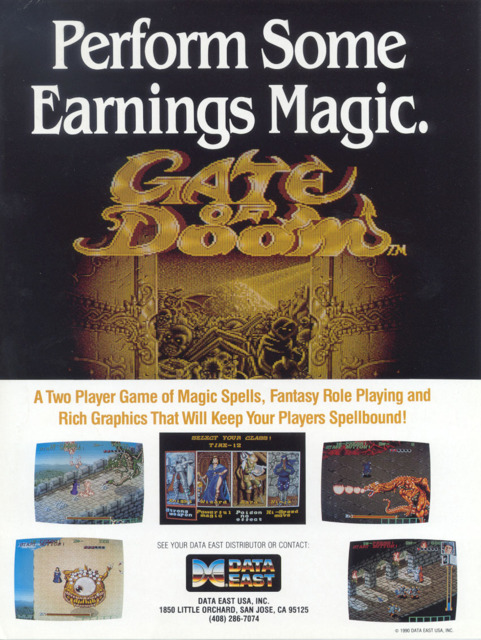