Alpha (アルファ) is a visual novel adventure game, developed and published by Squaresoft in 1986, for the PC-8801 & PC-9801 and FM-7 computers. It was known for its real-time animated cutscenes, epic cyberpunk space opera narrative, and scantily-clad heroine.

The game is considered a spiritual successor to two earlier visual novel / interactive fiction adventure games from Squaresoft: The Death Trap and Will: The Death Trap II. As such, the game is often considered the third and final entry of the Death Trap trilogy, despite having a separate storyline. Like the two previous Death Trap games, Alpha became popular among Japanese computer gamers of that era, for its advanced real-time animated cutscenes, epic cyberpunk space opera narrative, chiptune soundtrack, and scantily-clad heroine.

The game was notable for its epic, cyberpunk, space opera narrative, which surprised players at the time with unexpected plot twists (including an unexpected twist ending). It featured several plot elements that would later carry over to the Final Fantasy series, such as a heroine who suffers from amnesia and a rebellion against a corrupt repressive government. The plot also has some similarities to the proto-Matrix cyberpunk anime Megazone 23, which released a year earlier, as well as some plot elements similar to the later Phantasy Star series of space opera RPG's.

In 2101 AD, taking millions of immigrants on board, the first interstellar starship DAEDALOS left home for the planet ALPHA. People knew that they would not live to see ALPHA, but their hearts were full of hope for the new frontier.

A few centuries have since passed, and none of the initial crew are still alive. Not knowing what they are for, their children live without dreams, without hope.

Upon the hills stands a girl, with her hair flowing in the breeze. She knew nothing, nothing but her name... Chris.

The game begins with Chris standing upon a hill, and then suddenly noticing an explosion occurring in a nearby stadium, sparking the beginning of a revolution against a corrupt repressive government...

The storyline of Alpha progresses as the player inputs short commands carried out by the game’s heroine. The text is displayed within a white-bordered blue background, which is later present in message windows of the early Final Fantasy installments. The game also uses a keyword-based dialogue tree system, later present in Final Fantasy II.

Improving on its predecessor Will: The Death Trap II, which introduced the use of real-time animated cutscenes, Alpha was considered a technical marvel for further advancing this real-time animated cutscene technique, in the form of animated bitmap graphics (predating the GIF animated bitmap format by a year). This gave it some of the best graphics and animations available up until that time.

Another aspect that helped attract attention was the fan service, with the heroine Chris wearing a sexualized, revealing outfit (similar to Reika Kirishima from Time Gal). It also had several interrogation scenes showing her stripped almost nude, the closest Squaresoft ever came to approaching eroge territory (though quite tame compared to the actual eroge that Enix were releasing at the time).

This game, along with its predecessor Will, paved the way for the use of real-time animated cutscenes in later adventure games like Snatcher and countless other visual novels, platformers like Valis and Ninja Gaiden, and RPG's like Ys, Far East of Eden, and Lunar.

The soundtrack was well received, scored by Nobuo Uematsu (his third soundtrack after Will: The Death Trap II and Cruise Chaser Blassty), who would later gain considerable fame for composing the Final Fantasy series. The game came packaged with a soundtrack disc of Uematsu's music for the game. Like Will, Alpha also featured ambient sound effects to heighten the atmosphere. 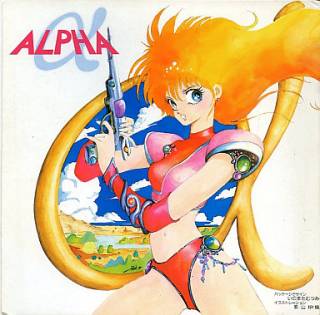