A 1999 arcade puzzle game from Namco. Similar to Tetris, but instead of rotating blocks, you change their shape.

In Aqua Rush, the object is to clear a given set of blocks as quickly as possible by filling in all gaps. Once there is a solid line, it vanishes, and any excess blocks fall upwards to the next row. Players are given a series of three-block wide pieces, often with one or more additional blocks on the second row. The pieces cannot be rotated, but they can be moved left or right. The primary mechanism of play is grow the block vertically. There are three buttons, each corresponding to the relative section of the piece. For example, pushing the middle button makes the middle column of the piece expand by one block. The piece can be grown indefinitely up until the point touches the play area. Take advantage of the way blocks collapse to create combos and "rush" to the finish. Players are ranked and graded based on completion time. 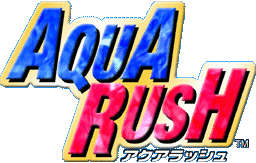