Desktop Dungeons is a short timespan roguelike dungeon crawler. The player has to utilize the simple rule set and their class to beat the boss.

Each game or round consists of one dungeon floor, randomly created, that you must navigate through, gaining levels until you can defeat the boss. As you move more of the dungeon is revealed, allowing you to find hidden treasure or power ups. Once you have defeated the boss, a score screen is shown and any game rewards are given to you. These rewards include new game modes, classes, or races. There is only a single floor to each dungeon, and no persistent characters from dungeon to dungeon. Long term progression in the game comes in the form of collecting gold and unlocking new game elements, which can open up new strategies.

Although the game is heavily informed by roguelike design, each level is akin to a tactical puzzle game. The primary way for the player to regain health and mana is by exploring squares; if one uses up this resource recklessly, it is easily possible to lock oneself out of being able to defeat the level's boss. More difficult levels often require more complex strategies, such as targeting monsters of much higher level than the player, or carefully timing a level up to take best advantage of the free health and mana restoration associated with it.

After the initial freeware release of the alpha version in 2010, QFC Design turned their efforts toward an enhanced, full version of the game, which they have rewritten in the Unity Engine. The full version was commercially released in 2013 on PC, Mac, and Linux with iOS and Android ports following.

The full version features enhanced graphics and expanded gameplay. It uses a world map with multiple dungeons, and each of these dungeons contain distinguishing features, such as different level layouts and different selections of monsters. This provides a much expanded selection compared to the level types available in the alpha. The player undertakes a series of quests to unlock new dungeons, as well as items, classes, races, altars and other features. Dungeons may now include sub-dungeons, branches that often contain rewards or puzzles. A "preparation" system was introduced in the beta, which allows the player to spend gold in exchange for certain advantages at the start of a dungeon run. The preparation system includes item banks, which allow the player to store items they have found and reuse them in later dungeons.

Due to extensive rebalancing, some gameplay elements including class abilities and gods now operate quite differently in the full version, compared to their counterparts in the freeware version.

The full version of the game is now available for purchase on Steam and on the the creator's website. The game retails for $14.99 and was officially released on November 7th 2013.

Stores are placed randomly at the beginning of each dungeon and are revealed whenever you uncover the tile next to it.

: keep in mind that the Tinker class gets a 20% discount on store prices.

The full retail version of Desktop Dungeons features a fullly developed soundtrack written by Danny Baranowsky and Gran Kirkhope. The Desktop Dungeons Original Soundtrack features 25 original tracks and is available for preview and purchase on Bandcamp for $9.99.

Desktop Dungeons won the "Excellence in Design" award at the 2011 Independent Games Festival. 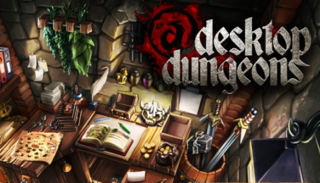