Trioncube is a Tetris-like DS game released in 2006 by Namco.
Nintendo DS

In this game, the objective is to rescue a lady Princess with the help of a spaceship named Penko. Each "round" is then a timebatle to reach the distance seperating you and the Princess.

The basic gameplay of the game is really similar to Tetris. The main goal is to form 3x3 squares (trioncubes) as more fall down, to clear the level. As soon as a 3x3 squares is in place, other blocks can be added to it, so the player can clear a bigger section of the level. That sec tion will be cleared as soon as a wrong piece is added to the pack. Note that the color of the pieces doesn't matter in this game, only the shapes. The whole gameplay revolves around this delayed explosion system, that will allow the ship to gain speed and distance, to finish the levels.

Unlockables, such as graphics and items, are also gained while playing the game.

Trioncube has a few modes that you can play with :

The story of the game starts with a basic plot : the Princess has disappeared and somebody needs to save her. The player plays as the Captain of the ship Penko, who looks like a fat pingouin. During his journey, he has to save the Princess from numerous situations, as kidnappings, black holes and such. 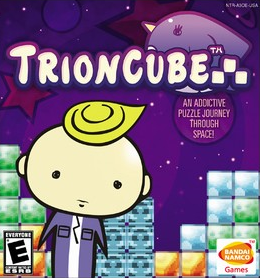