ilomilo is an abstract 3D puzzle platformer developed by SouthEnd Interactive and published by Microsoft for Windows Phone 7 and Xbox 360 (via Xbox Live Arcade) and Windows 8. Players control ilo and milo, two friends whose goal is to navigate a small world of cubes and unite with each other.

ilomilo was originally released on November 8, 2010 for the Windows Phone 7 for 400 msp ($5, free for AT&T customers through a special link before December 31, 2010). The trial version of the Xbox Live Arcade version was made available on November 26, 2010 through a "secret" website (players could still purchase the full version from the trial version), and the game was officially released on the Xbox Live Marketplace on January 5, 2011 (as part of Microsoft's "Games for the Holidays" promotion) for 800 msp ($10).

Additional costumes for ilo and milo in the Xbox Live Arcade version are available by playing the game while having an achievement in either A World of Keflings or Raskulls. Conversely, having an achievement in the Xbox Live Arcade version of ilomilo adds a playable ilo in Raskulls and both ilo and milo in A World of Keflings (as non-playable characters wandering the world).

Ilo and Milo are two best friends that, unfortunately, live on opposite sides of their little world. Every time they try to meet with one another the world seems to have changed and they can't be sure if it is due to a mysterious outside force or just their bad memory. Along the way ilo and milo meet Sebastian, a self-important inhabitant of the peculiar cube world who helps them on their way and tells them stories. The pair can also rescue three Safkas -- small, limbless creatures who are fond of hats -- in many of the game's stages.

Going on an autumn stroll, Ilo and Milo find a trail of fallen leaves. Filled with excitement they both followed the trail of leaves hoping to find something new and fun. Before either of them notice, they both had split up and now must try and find each other again.

This game features two avatar awards. The T-Shirt was almost a real physical product and several mock-up designs can be seen at the ilomilo blog.

Ilomilo's first add on, Autumn Tale, was released on the Xbox Marketplace on March 9th, 2011. The add on featured 25 new levels presented in an autumn like setting, more safkas to find as well as more eggs in multiplayer mode and additional achievements.

As is becoming the trend, ilomilo features several cameo appearances by characters from other independent games. Super Meat Boy is either hidden in the game or will be patched in soon. One of the first bonus stages sees the world of ilomilo invaded by the blobby creatures from World of Goo. Victor Neff, starring character in the indie adventure, The Dream Machine, has also been spotted in ilomilo and conversely, a figurine of Milo can be found in that game. You can also see Josef, the lovable extendo-bot from indie adventure Machinarium in one of the bonus stages. The iOS release, Kosmo Spin, shares a similar art style to ilomilo as well as a brief cameo by the pair. Ilomilo is also playable in Raskulls if the game is found on the same xbox.

Simogo, on May 19th released Bumpy Road, featured a statue in one of its backgrounds of Sebastian. 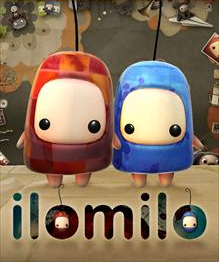