The PC Engine's answer to Columns and Puyo Puyo, Panic Bomber is a "falling blocks" puzzle game and spin-off of the studio's Bomberman series.

Bomberman: Panic Bomber is a tile-matching puzzle game developed and published by Hudson Soft for the PC Engine Super CD-ROM² System in Japan on December 22, 1994.

A spin-off of the Bomberman series of action games, Panic Bomber is a "falling blocks" style puzzle game similar to Puyo Puyo and Columns, where players try to maneuver and rotate groups of three colored blocks (resembling the heads of the titular character Bomberman) down the playfield in order to create matching patterns (where three or more blocks of the same color, either horizontally, vertically, or diagonally, causes those blocks to disappear). The game is played primarily in a versus format, where players must try to avoid overflowing their playfield before their opponent does.

Unique to this game is the "bomb" system, where the game spawns unique bomb tiles that can explode in the four cardinal directions (similar to those in the main series), exploding other bombs in a chain for additional points. While basic bombs are inert by default, players eventually have control of red bomb tiles that explode when settled. Detonating multiple bombs at once gives additional points and fills the bottom of the opponent's screen with garbage tiles (resembling Bomberman's head after being hit by an explosion) that can only be cleared by explosions. As each match progresses, players "level up" the range of their explosions (up to five additional tiles in all cardinal directions) and gain access to a special "giant bomb" piece (that clear all tiles in a large radius).

The original PC Engine game was digitally re-released as a Virtual Console title for the Wii (exclusively in Japan on March 18, 2008) and Wii U (in Japan on September 16, 2015, with a worldwide release in late 2017). The game was also adapted as prt of three of the series' Japanese-exclusive mini-game collections: Bomberman 64 for the Nintendo 64, Bomberman Land 2 for the PlayStation 2 and GameCube, and Bomberman Jetters: Game Collection for the Game Boy Advance. 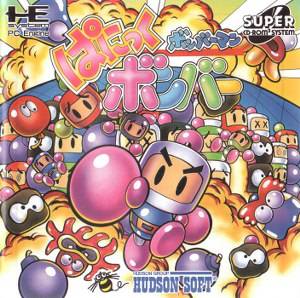