Prince Garrett of Baltia must rescue his homeland from the Dalsis Empire in this strategy RPG and the first game in Masaya's Langrisser franchise.

Also known as Langrisser, Warsong is a strategic/tactical role playing game developed by an internal group within Masaya known as Team Career with character designs by Satoshi Urushihara. Team Career would later create the subsequent Langrisser games, eventually splitting from Masaya and joining Atlus. The game was localized for North America by Treco.

Warsong is the first in the Langrisser series. It and its sequels blend tactical warfare hero style control of Fire Emblem with the unit control of Famicom Wars, with each unit on the map usually representing a small squad of soldiers.

The story starts with Castle Baltia being attacked by a force known as the Dalsis Empire.

The King of Baltia orders that his son Garrett, flee before the invading army lead by Lord Geryon can capture him. Garrett only had a small handful of men and his bodyguard, Sword Master Baldarov, set off to find help to beat back Geryon's forces.

After escaping the castle Garrett meets Mina on the road to Sulras. While getting to town the group is attack by a group of theives, Garrett and Baldarov defeated the theives and got Mina to town safely. At Sulras Garrett talks with Duke Carleon, telling him what has happened in Baltia. Carleon tells Garrett to rest for the night. That night Sulras is attacked by a group of theives looking for revenge for their fallen comrades. Garrett, Baldarov, and Carleon's bodyguard Throne fight off the enemy while Mina got the townpeople to the church for safety. After the theives were defeated Sabra, one of the king's fighters, gets to town, telling Garrett that the castle has fallen and his father stayed to fight the enemy alone. Garrett decides to go back to the castle to take it back.

On the way back to Baltia Castle Garrett, Baldarov, and Sabra are attacked by evil slimes. Their forces have no way to fight back and are almost done for until Mina and Throne show up with troops and guardsmen with torches, killing off any slimes. Throne tells Garrett that the Duke has told him to follow Garrett's orders and to help him get Baltia Castle back. Mina also says she will join Garrett, not taking no for an answer.

With new forces Garrett is almost back to Baltia when he is attacked by Lance and his forces. After a long battle Lance retreats before he could be killed. While the enemy retreats one of Lance's men shoots Baldarov, killing him. Garrett's swears revenge and marches onwards to Baltia castle.

He gets to Baltia Castle to see the man who attack it, Geryon, sitting on the throne. Garrett and his forces charge upon the castle. After a long battle Garrett defeats Geryon. After his defeat court mage Calais and Crocodile Knight Tiberon are freed. Calais tells Garrett that the attack was done so that the Dalsis Empire could steal the great sword, Warsong. The sword has an evil power within. Garrett decides right then to attack the Dalsis Empire.

As Garrett is about to attack the Dalsis Empire he gets word that Baltia's fortress, Anzel, is under attack by the Dalsis forces that were retreating from being defeated at Baltia Castle. Garrett and his forces go to the fortress and see that a small force under the command of Bayard are all that is keeping the fortress from falling. Garrett sees that Lance and Dalsis general Momus are the ones attacking the fortress. Garrett's forces fight their way into the fortress, killing Momus and defeating Lance (who escapes again) and save Bayard. Garrett has Bayard join his group for the attack on Dalsis. A scout tells Garrett of Dalsis forces retreating. Garrett gives the order to give chase.

After defeating the remaining forces Baltia starts it's attack on Dalsis. But by the time Garrett and his forces make it to the border they see that Dalsis' leader, Pythion, has set up defences along the river Worth. After a long battle across the river and through the Castle Valk Garret is joined by Duke Carleon and his forces. Together the Baltia forces march onto Castle Dalsis. Once there they fight into the castle. Lance once again shows up, attacking Garrett. Lance acts confused as to why Baltia is attacking Dalsis. Garrett explains that Dalsis stole Warsong and they are trying to get it back. Lance escapes again when Garrett's forces make it to the center of the castle.

Baltia's forces find out that Pythion is in what is known as the Twin Castles. Garrett and his allies make their way though and attack Pythion. Pythion tries to explain that he is the only one with the power to control Warsong and unite the world under his rule. Garrett tells him he is wrong but has no choice but to kill Pythion, getting the sword back from evil.

On the way home to Baltia, Garrett and his allies come across a runied city populated by stone statues. Soon monsters attack. After awhile they find that Lance was turned to stone. After freeing him and defeating the creatures he joins Garrett, but only so he can settle his score with him later.

As they try to get back to Baltia Garrett's forces are attacked by evil creatures, and a great dragon who is after Warsong. After a long battle the dragon is wounded. Garrett commands that they kill it before it heals and chase it into the valley of Allenst. After a long journey in the valley they find a sword called the Dragon Slayer and use it to kill the dragon. After the dragon's death they find a stone carved with the story about how a knight named Ganelon brought evil to the land but Galafron of Elthlead used Warsong to defeat the great evil. From the stone Garrett and his forces head to Seneferia, the forbidden land

After a long journey they make it to Seneferia. Once there they are attacked by an wizard named Naxos. After killing him they make their way to an underground passage. At this point Lance leaves them. As Garrett and allies make their way thought the passage they are attacked by another wizard named Mortimus, who is the brother of Naxos. He tries to get revenge on Garrett but fails and is defeated. One of Garrett's men finds a set of stairs and the team go down.

Once down in the cave they see the ancient knight Ganelon has started to bring the evil back. Garrett and team attack but it is too late. Ganelon summons the great evil, Chaos. As Garrett and allies defeat Ganelon Chaos tells Garrett that Chaos is needed to balance the world. Lance comes and helps with this final battle and appairs to die. Chaos is sealed away and the battle is over. Garrett and crew escape the tunnel before is caves is. In the end Garrett wonders if Chaos was telling the truth about balance. 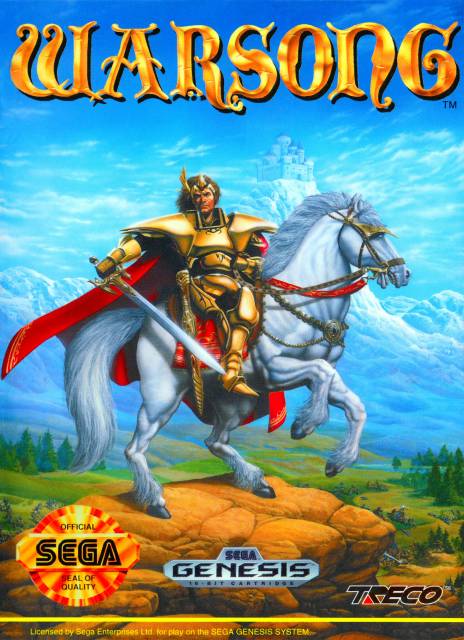