Developed concurrently with the original DeathSpank, DeathSpank: Thongs of Virtue sees the thong-wearing hero in a modern setting.

As teased in the ending of DeathSpank, the setting for TOV includes a more modern wartime theme, as such, Deathspank's arsenal will now include guns and other more modern weaponry. DeathSpank will also be able to visit new areas like the North Pole, captain his own pirate ship, and the possibility of battles at sea has been hinted at by the developers.

Players of the first game will not be able to bring their character into the sequel and continue to build on him, instead everyone will begin the game with a new Deathspank and have to level him up from scratch once again.

Due to the fact that the two Deathspank games were developed simultaneously, Hothead were unable to respond to any of the feedback from the first game in a way that would improve the second due to the constraints of time, and as such, the much-requested online co-op feature is still not present in this game. However, offline co-op returns, with a second player able to join DeathSpank in his adventure, playing as either Sparkles the Wizard, who featured in the original game, or a new character called Steve the Ninja.

In DeathSpank: Thongs of Virtue, we join our hero DeathSpank once again as he must find and destroy six ancient, dangerous, magical thongs that grant great power to those who wear them.

DeathSpank has one more unimportant thing he needs to do in "The Snowy Mountain Dungeon". This DLC, costing 240 Microsoft Points and free on the Steam version, has you finding a note which tells you to return to the Snowy mountains, where a new dungeon has opened up. This add on features an estimated 30-40 minutes of extra content.

Once you arrive at the dungeon you are given a quest by the silent Frozen Monk to kill the Talking Tree (who, contrary to his name, is also silent). To kill him you must battle through the dungeon, killing the Ice Spiders, Ice Greems and Ice Monsters that obstruct your way. There are also Ice Bunnies to kill if you wish, but they don't really put up a fight. There is an added mini-boss called Neapolitan, who appears to be a giant Orque colored like the ice cream. The final battle with the Talking Tree has him heavily defended by multiple Ice Monsters, and the Tree itself is the highest level opponent found in the game (level 22), though this is not the hardest battle as everyone has a weakness to fire. Once killed you can return to the Frozen Monk for your reward of XP and "Shanks Mega-Bloody Motor-Saw", which does the highest physical damage of any melee weapon in the game.

To give DeathSpank a greater chance of success in his final mission the level cap has been raised to 21, where DeathSpank becomes know as the Battler of Battles, and a new armor set is added. This replaces the armor "of Tomorrow" set as the best armor in the game and is called the "Artic Explorer" set. This set is notable for using seals as shoulder pads. The "Artic Explorer" set is found in chests which are scattered throughout the dungeon.

There are 5 new weapons to be found, 2 of them being demon limbs which deal fire damage and 2 being tusks which deal ice damage. These have the highest damage for there elemental type in the game for melee weapons. The final added weapon is "Shanks Mega-Bloody Motor-Saw". There is also an improved grenade type, the "Mighty Fire Grenade" , which does extra fire damage and is perfect for slaying multiple ice-type enemies from afar. 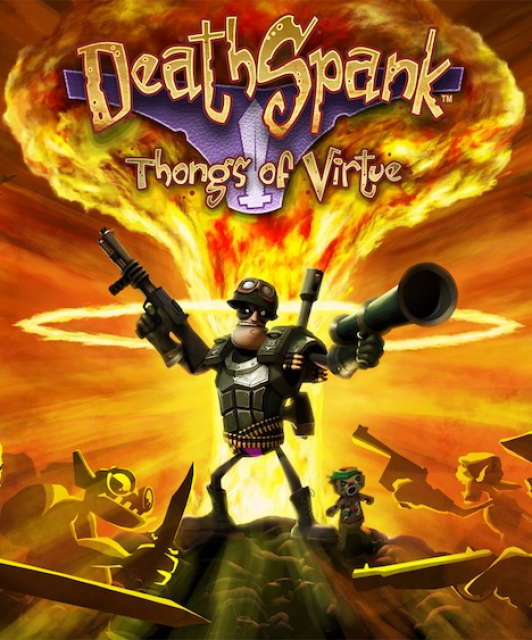