Cleopatra Fortune (known in the North American PS1 box art as Cleopatra's Fortune) is a falling-block tile-matching puzzle game developed by Natsume and released by Taito for arcades (using their Taito F3 Package System hardware) in Japan in 1996. An early version of the game was released in 1995 as a downloadable game for the Taito X-55 home karaoke machine.

Featuring a cutesy Ancient Egyptian theme (and starring cute princess Patorako, who resembles Cleopatra and is shown later in different cosplay), Cleopatra Fortune is reminiscent of Puyo Puyo, Baku Baku Animal, and Tetris, where players must arrange rotatable falling blocks on their playfield to clear them before the stack reaches the top.

Along with clearing lines of normal "stone" blocks (similar to Tetris), the game features a unique criteria of clearing other types of blocks included in each play piece: by surrounding groups of them with stone blocks. It also features the use of 2x1 blocks, which cannot be split apart and can leave gaps in the playfield.

The game was later ported in Japan to the Sega Saturn (on Feburary 14, 1997), the Sony PlayStation (on May 21, 2001), and the Sega Dreamcast (on June 21, 2001). Both the PS1 and Dreamcast versions were ported by Altron. The PS1 version received an overseas release in 2003, released by Mud Duck in North America and by Midas in Europe. The Saturn version later received a digital re-release for the Xbox One, PlayStation 4, Nintendo Switch, and PC by City Connection worldwide on November 23, 2022 as part of the S-Tribute series.

The arcade version was later included in the Japanese PS2 compilation Taito Memories Joukan and the overseas PS2/Xbox/PC compilation Taito Legends 2. It also received a sequel in 2002, titled Cleopatra Fortune Plus. Patorako also appeared as a hidden opponent in the action-puzzle game Puchi Carat.

Players are given a variety of block combinations (which can have multiple block types) that they can rotate and place on the field. To clear the playfield, they must either:

As blocks fall due to gravity, players can chain together multiple clears for bonus points (which can be very large due to the bonus multiplier per clear). In multiplayer games, chains cause garbage blocks to appear in the opponent's playfield.

In addition, a special 1x1 golden pyramid piece can rarely appear. When this piece touches another block, all blocks of that type are immediately cleared. 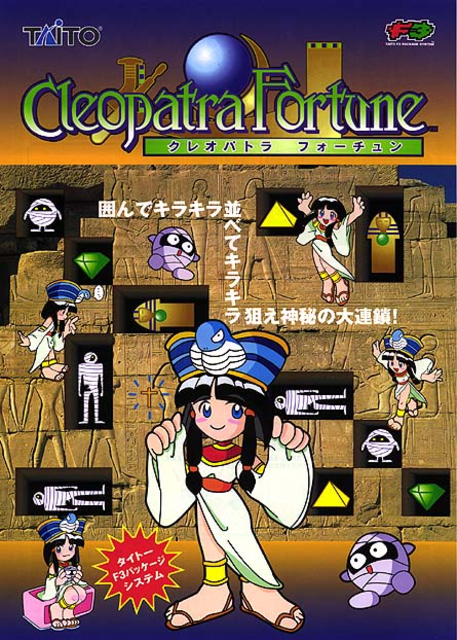