Galaxy on Fire is a shooter developed and published by Fishlabs Entertainment for iPhone, Zeebo, and Java based mobile phones.

In Galaxy on Fire players pilot a space ship which is controlled in a third-person perspective. Missions are given which range from destroying enemy ships to escorting friendly ships. Players earn a currency for completing missions which can then be traded with the games different species traders for upgrades. 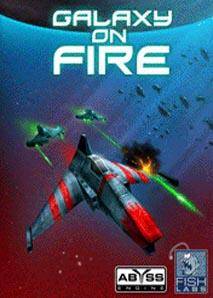