The Tempura of the Dead

The first commercial release by 8bits Fanatics (an independent Japanese developer, primarily a developer of PC games), The Tempura of the Dead is an action platformer with an 8-bit graphical style. The game was released on November 9, 2010 on the Xbox Live Indie Game marketplace for 240 Microsoft points (the equivalent of $3.00). Tempura of the Dead was very well received, both in terms of sales and ratings (it still ranks high on the top rated list on the Xbox Live Marketplace). Critics praised the game's retro style, unique gameplay mechanics, and longevity.

In the game, players take control of either Sugimoto, the samurai, or Thompson, the President. These men are two of only a few survivors of a zombie apocalypse in the United States. Rather than killing the zombies, Sugimoto teaches Thompson how to release their souls from their bodies, freeing them from the bondage. Eventually, the duo reach the source of the virus; a corrupted version of the Statue of Liberty. After defeating it, the United States is saved, and a closing cut scene depicts the two shaking hands and going their respective ways.

After the success of the game on the Xbox Live Marketplace, 8bits Fanatics released The Tempura of the Dead's soundtrack for free on their website. The soundtrack contains eight tracks, ranging from the title theme to the final boss theme.

The Tempura of the Dead is a traditional side scrolling action platformer in the same vein as Ninja Gaiden. Players can control either Sugimoto or Thompson, swapping between them at any time during the level. Sugimoto, the samurai, attacks with a sword at close range. He is able to jump higher than Thompson, and has higher attack power (although he attacks much slower). Thompson attacks with a machine gun, and attacks much faster than Sugimoto, although at a lower base attack.

The key gameplay mechanic in Tempura of the Dead is the ability to juggle enemies' heads to activate Tempura Fever. In Tempura Fever, attack is boosted and more score is given. Once an enemy is initially killed, their head flies off. Hitting that multiple times to hit it back into the air makes it eventually disappear, and hits are added to the combo meter. Once it reaches a certain point, Tempura Fever is activated.

Rather than traversing through several levels going to the right (as per most side scrolling games), the goal in Tempura of the Dead is to eliminate all of the germs in each level. Germs are large enemies that are sources of corruption, spewing out zombies and projectiles. Once all of the germs in a level are destroyed, the player is teleported back out to the world map.

Periodically, there is a shop available on the world map. Visiting this shop, run by a friendly zombie named Zom, players can purchase health upgrades, boosted attack power, special items, more weapons, and extra lives. Weapons work differently for each character. In the case of Sugimoto, purchasing a new weapon merely upgrades his sword (in terms of attack power and range), while Thompson's weapon upgrades consist of entirely new weapons (e.g. laser rifle, grenade launcher). These upgrades are purchased with the points acquired from killing enemies. 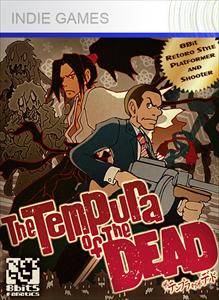