A soccer game from Konami first released in 2001 on the Playstation 2. It was later ported to the GameCube and Xbox in 2002.
PlayStation 2

MLS ExtraTime was released to very positive reviews, receiving an 8.2 from IGN, and an 85 from Digital Sports. Reviewers likened the game to the much-superior Winning Eleven 5, and liked the games realism compared the much more arcade-style gameplay of FIFA.

Despite its only iteration having generally positive reviews, MLS ExtraTime was limited to only one release, as the MLS licensed its players and uniforms to EA Sports' FIFA series.
Pro Evolution Soccer David Beckham Soccer 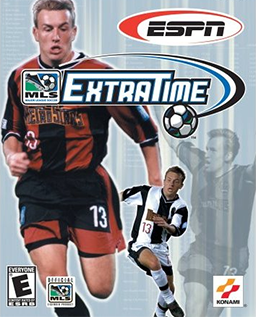