Epic Dungeon is an old-school dungeon crawler type game. Where player need to fight through 50 levels to escape the dungeon's.

Each class has a own default spell, which will get two points on every spell level-up. Cross training can be done, but only one point is allocated to a spell if this is not a default spell.

Orb, the default Tinkerer spell is a mechanical pet that helps the hero to kill the enemies. The orb can be also trigged to cause explosion. Making this the one the more powerful spells on lower difficulty level.

Frenzy, is the default Berzerker skill. Frenzy attack is a spinning blade attack that can be triggered to do devasting triple combo attack.

Freeze, is the default Shaman attack. It can freeze the enemies giving player more time to kill the monsters.

Poison, is the default Gambler attack. Poison is a directional attack that causes the enemies to "bleed" hitpoints when hit. Not directly killing the enemies making this the most difficult spell to use.

Regen, as the other spells are available for all classes. Only difference is that no class gives and advantage for this health regenerating skill.

In February/March 2011 a 1.2 patch was released for Epic Dungeon that adds multiple changes to the game: 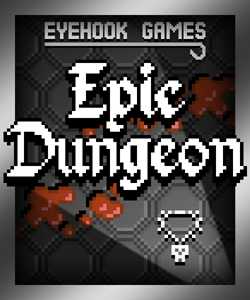