A combination golf-adventure sim developed by Sega with a cast of unique characters. It was only released in Japan.

Battle Golfer Yui is a text-heavy adventure and golf game developed by Megasoft and Sega released exclusively for the Japanese Mega Drive. It has two modes of play: Adventure Mode (which tells the story) and Golf Mode, which skips straight to the golf. The player can either play against the CPU or a friend in golf mode. There are a variety of options in both the dialogue sequences and golf sequences; of course the game wouldn't be complete without special golf techniques! The game features 16 courses: Each match is 2 out of 3 holes. The computer can be quite a tough opponent.

Mizuhara Yui was a normal 16 year old girl who simply happened to be extremely skilled at golf. Unfortunately for her, this skill brought her to the attention of "Dark Hazard". Dark Hazard is an evil organization bent on world domination through golf superiority and masterminded by the mysterious Professor G. They kidnap Yui and her friend and fellow golf genius Ryuzaki Ran to convert them in to "kaizou ningen" (改造人間) battle golfers in a manner that parodies Kamen Rider. Yui is saved by Doctor T, Professor G's brother, before her brain was altered. But what happened to Ran? After hearing about a "Hazard Cup" Tournament being put on by Dark Hazard, Yui decides to participate and sets out to Gil Country Club in hopes of finding her friend... and perhaps taking down Dark Hazard while she's at it!

Mizuhara Yui: The protagonist, she is a 16 year old golf genius. Her Battle Golfer codename is "Black Fire". She knows a variety of special golf techniques. Dark Hazard has also built an android copy of her!

Ryuzaki Ran: Yui's childhood friend. Her whereabouts are unknown since she was kidnapped by Dark Hazard. Unfortunately, she has been turned in to a superior battle golfer AND been brainswashed; can Yui save her? Her older brother Isao is also a pro-golfer.

Hagata Kaoru: A pro-baseball player turned battle golfer, he's a member of the "Ryuushin Tysons" and Yui's first opponent. For some reason he is absolutely positive Yui is an old male rival of his named Hoshi; this is a reference to the character he himself is a parody of, Hoshi Hyuuma from "Kyoujin no Hoshi".

GeroGero no Kitako: A spooky and strange battle golfer with an "eyeball mama" who lives in her empty right eye socket, she hopes for peaceful co-existence between humans and monsters and is not a member of Dark Hazard. She is a female parody of GeGeGe no Kitarou.

Kaiketsu Deport: Getting his power from his deport suit, he's a hard-boiled super hero who is going to take down Dark Hazard! He is a parody of "Kaiketsu Zubat".

Professor G: The mysterious evil leader of Dark Hazard, he is going to conquer the world with his army of enhanced battle golfers. 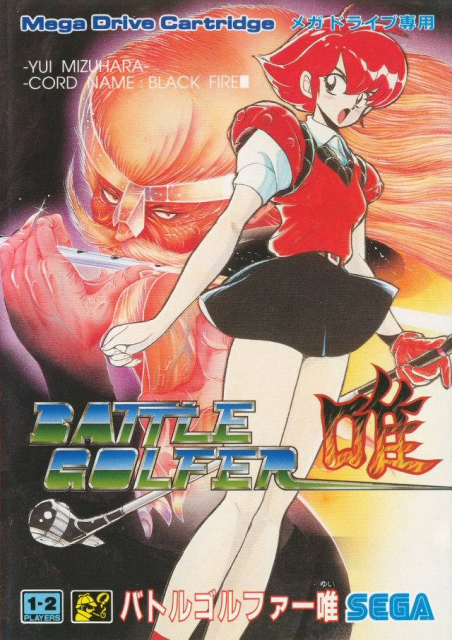