The first of two customizable interactive sound novel editors by ASCII and Success. It was released in the latter days of the Super Famicom on a large cartridge (SHVC-040) that takes memory paks compatible with the Satellaview system.

Sound Novel Tsukuru ("Sound Novel Maker") is a game creation tool from Success and ASCII Corporation and the follow-up to their previous game creation programs RPG Tsukuru (for RPGs) and Ongaku Tsukuru Kanaderu (for music). Sound Novel Tsukuru instead focuses on their namesake sub-genre of "sound novels", which are interactive visual novels with a sound component popularized by Chunsoft with games such as Kamaitachi no Yoru (Banshee's Last Cry) before other developers started creating their own examples.

As sound novels generally only require a backdrop, text and either music or ambient sound effects to tell their stories, ASCII Corporation jumped on this level of simplicity by giving players all the tools they need to create their own sound novels.

The game was one of a number of Super Famicom games compatible with ASCII's "Super File Twin" peripheral, which allowed for external save files on a separate device. The game was also supported by the Satellaview, letting people download additional pre-made stories from the online service. Sound Novel Tsukuru later saw a sequel, Sound Novel Tsukuru 2, for Sony PlayStation and Sega Saturn. 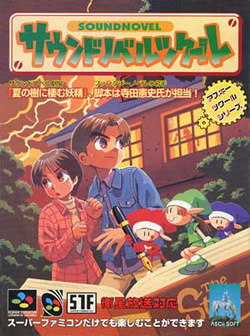