A.R.E.S.: Extinction Agenda is the first chapter in an episodic side-scrolling action platformer series from developer Extend Interactive, based in Thailand.

A.R.E.S.: Extinction Agenda is the first chapter in an episodic side-scrolling platformer action-packed series, taking a clear inspiration from games such as Mega Man and other classic games of the genre. You will play as Ares, a combat robot created with the purpose of saving humanity. The game was released on December, 14th 2010 on Direct2Drive, Gamersgate and their project website. It became available on Steam on January 19th, 2011.

In the late 21st century, the Earth is contaminated by pollution. Scientists from around the world have formed the United Earth (UE) in an effort to pool their resources to save the planet. Governments from around the planet contribute trillions of dollars to UE to fund their experimental research. After numerous failed projects, the group invests its resources into a concept devised by Dr. Julia Carson, known as Deep Space Reprocessing (DSR). It requires the creation of an advanced space station that would stockpile waste. Over time, this waste would be converted into organic material and essentially recycle the planet and make it more hospitable. The station is built and launched into the aptly named Junked Sector.

After the station is launched, large portions of the surface have been transformed and made hospitable. The Chairman of the UE predicts that within two generations, water will be drinkable from rivers and the number of pollution-related deaths would drop by 75%. Days after this announcement, it is discovered that a crystalline structure is traveling through the Junked Sector and would likely collide with the space station. With no time to attempt to move the station, those on board are told to brace for impact and to prepare for the worst.

As the structure approached the station, it began to emit a highly fluorescent gas. As they collided, the station filled with the gas and all of its systems went offline. UE agents on the ground tried everything to attempt to regain control of the station. After nearly a half an hour, the station came back online. Damage reports sent from the station reported little damage, but they unable to communicate with members on the station. The Chairman called for the creation of the Special Astronaut Squadron (SAS), tasked with investigating the strange occurrence on the station and reporting back to HQ. The leader of the SAS would be Dr. Julia Carson, designer of the DSR project. The group formed and left for the station 48 hours after the incident.

When they arrived at the station, it was obvious the reports were in error. The damage was severe, but not enough to make it inoperable. As the SAS toured the ship, collecting samples of the gas and the crystalline structure, the group was attacked by a robot from the ship, critically injuring one of the members of the team. The group headed for the station's armory and sent a distress call to UE HQ, along with the samples they collected.

The UE HQ received a copy of the transmission and began producing small amounts of it for testing. After days of testing, little was discovered as to how it was affecting robots. The only thing they discovered were a few materials that were immune to the gas. Research named the gas zytron, and they devoled a zytron-immune robot to help combat the gas. The robot needed to excel at combat and have a name akin to its strength and brutal efficiency – Ares. 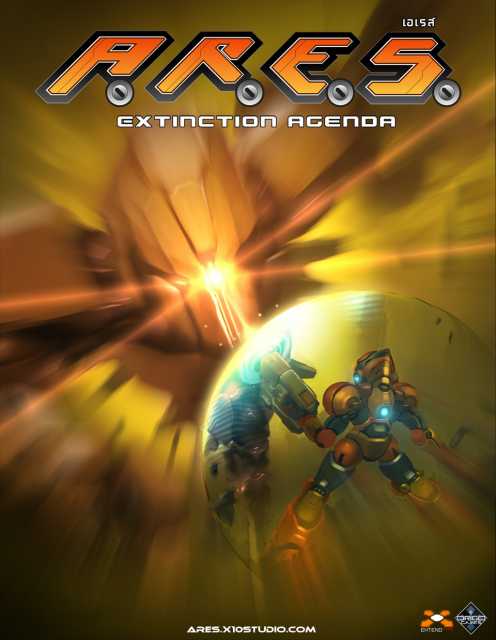