Known by a contemporary audience for its unfortunate title, Nuts & Milk is also the very first third-party game released on any Nintendo console. It was released by Hudson Soft for the Famicom in 1984.

Nuts and Milk is a simple puzzle/platformer released for Nintendo's Famicom (the Japanese NES) and various home computers in Japan in 1984. It stars Milk, a pink blob who must get home to his fiancée, another pink blob (with a bow). Unfortunately, the jealous Nuts, a blue blob, wants Milk's fiancée for himself.

Gameplay involves collecting all the fruit on a level to unlock Milk's house, so he can return home to his bride-to-be, while at the same time avoiding Nuts and various other hazards.

The Famicom version involves side-scrolling platform action, while the home computer version changes the perspective to an overhead view and removes all jumping.

Moai Kun The Adventures of Cookie & Cream ilomilo From the Legend of Balubalouk: Aigiina no Yogen 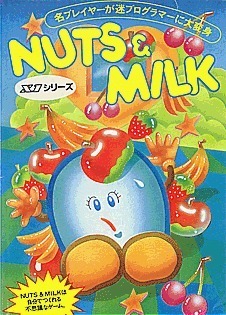