Face Raiders is an augmented reality game in which players must shoot down flying faces using the two outer cameras on the 3DS.
Nintendo 3DS

Face Raiders is an augmented reality game published by Nintendo and included pre-installed on the Nintendo 3DS. The game utilizes the handheld's built in camera to snap a picture of the player's face. The image is then mapped to an orb, allowing the image to be manipulated so that it appears to be smiling, laughing, frowning, or even kissing.

The game starts out with only one level unlocked, with more levels being unlocked by "rescuing" more faces (taking a picture of a face and then defeating it as a boss in the level,) or using the "Show a Friend" mode, which includes shorter levels, or mini-game like variations of AR features in the game. The levels unlocked through the "Show A Friend" mode become unlocked by showing more friends, meaning they have played through the level entirely. The amount of friends already shown are conveniently placed on a ticker at the bottom of the screen.

After a photo is taken and the game begins, the display switches to show the environment around the player as seen through the 3DS's exterior cameras. Orbs with the player's face will fly around the environment, and the player must move the 3DS to take aim on the attacking faces using a targeting reticule and fire shots at them to knock them out of the air. It is also possible to blast holes in the environment displayed in the camera.

Face Raiders is not meant to be played in a stationary position. To track targets and avoid attacks, the player must constantly be on the move and maneuvering around the nearby environment. An on-screen indicator alerts the player to the position of enemy faces not currently visible on screen.

At the end of the round, the player will confront a boss in the form of a giant face wearing a samurai's kabuto-style helmet. The boss's weakness is a gem on the helmet's forehead. Upon defeating the boss, the face is added to a collection and the game ends. 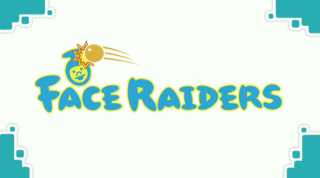