Developed by SideQuest Studios, Rainbow Moon is a PSN title with a heavy emphasis on character development. It features an isometric open world with a hand drawn visual style, six different playable characters and a strategic turn-based combat system. As with the Söldner-X series, the game is aimed to run at 60fps.

On "one of those gloomy nights" (as the game puts it), Baldren heads to a forest called the Ellje Woods to confront Namoris in a yearly duel. The woods, full of magic and intrigue, contain portals to many different lands. As one of the gates opened in front of Baldren, he was struck by its beauty. Tricksy Namoris shoved him into the gate, which teleported Baldren to a distant land. As Baldren fell through the gate, he could hear Namoris's laughter and saw the appearance of thousands of creatures. He passes out and awakens in the Caesar Islands, unsure of where he is and what exactly has happened.

The game follows Baldren on his journey back from the islands, as he tries to find Namoris and the cause of the appearance of the monsters.

Rainbow Moon centers around turn-based strategy combat. Enemies can be seen on the field, and while certain battles are unavoidable, many enemies can be ignored. Random encounters are optional. The player sees a list of the enemies he or she will fight, and then they can choose to either fight by pressing X or ignore the random encounter altogether.

Combat takes place on a grid. Characters and enemies have a certain number of moves they can perform during each turn. For hero characters, the number of moves is dependent on their experience levels. Characters can move around the grid, attack enemies with equipped weapons, use abilities (dependent upon their mana), and defend. Turns are determined by the speed attribute of all the characters and enemies.

While there is a traditional leveling system wherein characters gain experience, there is also a stat boosting shop that allows players to cash in on points earned in combat to boost their basic stats permanently. Various stats such as speed, strength, HP, MP, and defense can be boosted, each with a different cost. These points are separate from the game's currency, which allows players to buy items and equipment from shops.

Crafting plays a role in Rainbow Moon as well. Armor and weapons can be upgraded with miscellaneous parts found through battles or through the various chests scattered throughout the world. Each weapon and armor piece has a set number of upgrades allowed.

Small animals can be found and consumed to also permanently increase stats, and abilities are learned through finding or purchasing scrolls.

The game can be saved anywhere, and when players lose a battle, they are respawned at the point just before the battle with low health. 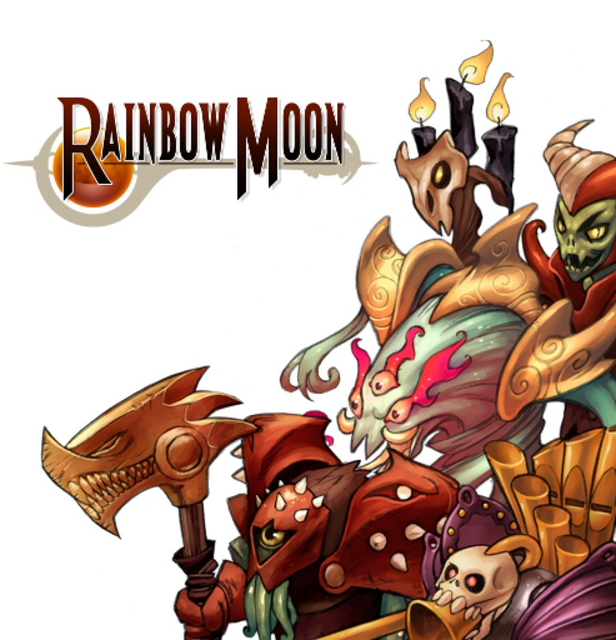