Live a Live is a scenario-based RPG from Squaresoft, similar to their Romancing SaGa series. The player can select between seven scenarios and play through them in any order. Each has a different protagonist and is set in a different time period, but is linked by the same omnipresent evil: an entity known as Odio, which manifests in different forms in each of the scenarios. After all seven are complete, the game moves to the final two chapters.

The original version of Live a Live was never released outside of Japan, although it did receive a fan translation. In 2022 it was announced that the game would be released globally in the form of Live A Live, an "HD-2D" remake for Nintendo Switch.

Live A Live plays out over several chapters, each with a unique protagonist and subsequent story, and all set during different time periods. For the final chapter, all of the characters from the previous chapters join forces to fight against Odio.

Pogo is the main character during this chapter, and has stats that mostly focus on physical attacks and defense. His best friend, Gori the ape, helps him save the lovely Beru from the dinosaur O-D-O. This chapter is set in a land before language, so the player has to find different ways of communicating with the other NPCs.

Set in a war-fraught Japan, the main protagonist is the ninja Oboro, a well rounded character in both defense and offense. Along with a veritable carbon copy of himself named Circle, and a fellow prisoner, he fights against a powerful tyrant named Odelou. Oboro can opt to kill every resident of the castle he is sent to, or kill absolutely no-one. Different rewards are given for both.

The three main characters; Samo, Lei, and Yun, are all training under the Kung Fu master, Ro. One day, their dojo is attacked by ninjas, which are led by the evil Odiwan Lee. Two of Ro's apprentices are killed, and the remaining character helps Ro kill Odiwan Lee. The apprentice is the character to move onto the finale.

Sunset, the main protagonist during this chapter, is an outlaw running from a bounty hunter named Maddog. After being jumped by a few members of the local gang called the Crazy Bunch and killing both of them, Sunset and Maddog team up to fight off the inevitable counter attack by the rest of the gang. After a long fight, the leader of the Crazy bunch, O. Dio, attacks them. Sunset and Maddog both defeat O. Dio in the end. The player can make the final battle easier by removing gang members ahead of time by working with the townsfolk to set up traps and ambushes.

During the present time, the main protagonist, Masaru, enters a tournament in order to learn many different techniques and become the best fighter in the world. After several boss fights, the final fight between Masaru and the mysterious Odie Olbright decides the world's strongest fighter. The player can prolong each battle until they are hit by the opponent's special technique, which they can learn and use in future battles.

There are three main characters during this time period: Taro, Akira, and Matsu. Akira finds out that the government is trying to summon a god named Odeo by melting everyone on Earth. Akira learns how to control a robot to fight against Odeo. This chapter switches its combat between fighting as Akira on-foot and in the enormous mech Buriki Daioh.

The main protagonist is a spherical helper robot named Cube. He investigates the ship after a series of unusual accidents kill the crewmembers one by one. It and the surviving crewmembers discover that the computer's AI entity 0D-10 is the culprit. He is defeated by the main character hacking the video game in the ship's lounge. The weaponless Cube cannot physically attack the behemoth-like creature prowling the spaceship, and must find ways to outwit or evade it to move around.

This chapter is unlocked after the player completes all the other chapters. It focuses on a knight named Oersted, who is tasked with rescuing the princess of the kingdom of Lucretia, who also happens to be his fiancee, from the clutches of the Demon Lord. Joining him include his best friend Straybow, a wizard; Hash, a knight who previously defeated the Demon Lord; and Uranus, a priest. Towards the end of the chapter, things take a turn for the worse, and a string of events causes Oersted to sacrifice his soul to become the next Demon Lord, renaming himself Odio in the process.

This chapter is unlocked after the player completes the Medieval Chapter. There are four ways this chapter plays out, depending on which character the player chooses to be the protagonist and a number of different variables. 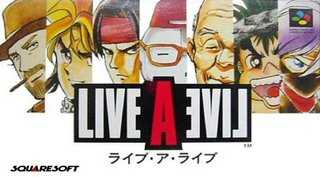