The game is presented with deliberately simplistic retro graphics, using a dark art style with strong Gothic Lovercraftian themes. The gameplay draws comparisons to N/N+, The Dishwasher, and Super Meat Boy with its fast pace and hazardous environments.

The game has combat elements where the female protagonist tackles the enemies by creating various combo moves. These are handled with the game's one-button combat mechanism. The levels are filled with spikes and spinning saw blades which serve as both a hazard for the player to avoid and as tools for killing enemies.

The game employs a combo mechanic where using the environment to damage enemies and chaining together kills will fill a gague; once full, the player is able to create a checkpoint anywhere they are not in immediate danger. Thus, the player is incentivized to kill foes creatively to allow one to save more often. However, having a checkpoint available while in combat also increases the score multiplier, providing a more risky option for high-scoring play.

Each level has collectible book pages which allow one to unlock bonus art. 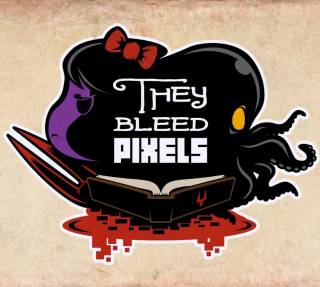