Project Dream was an unreleased game developed by Rare for the SNES. Development was eventually moved to the Nintendo 64, but the game was eventually redeveloped as Banjo-Kazooie, with most characters being re-used.

There are very few screenshots of the game online, making details very scarce. The game was centered around a young boy named Edison, who used a big wooden sword. Edison had long-standing trouble with pirates, led by Captain Blackeye, who are the main antagonists in the game. The pirates wanted to capture Edison, though their motives are unknown. It is assumed that the story follows Edison as he deals with the pirates.

There were quite a few main characters in Project Dream who eventually made it to the Nintendo 64 game Banjo-Kazooie, excluding Edison. Banjo was originally intended to be an ally to Edison in Project Dream, but was later given the role of main character once Rare found Edison to be too generic. Captain Blackeye was another character who did not make the transition into Banjo-Kazooie, but later made a cameo appearance in Banjo-Tooie.

Other characters in the game but did not make it into Banjo-Kazooie include Edison's girlfriend, Bully, Big Belly, Cockeye, an unnamed rabbit and an unspecified dog character. 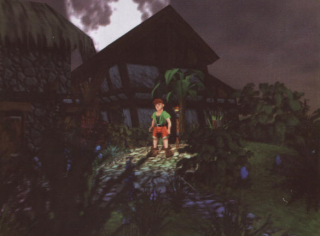