A Sunsoft game for the Famicom in which the fireworks-maker Kantaro makes the journey from Kyoto to Edo to reunite with his fiancee. This game is somewhat infamous in Japan for its sheer difficulty.

Toukaidou Gojuusan-Tsugi, or "53 Stations of the Tokaido" (Tokaido is the famous road that connects Kyoto to Edo, and originally had 53 post stations), is an action game from SunSoft released exclusively for the Japanese Famicom. The player is a fireworks-maker named Kantaro who leaves Kyoto to see his fiancée back in Edo, taking the titular road. He is beset with enemies at all times, including ninjas, samurai and a persistent and amorous middle-aged woman who wants Kantaro for herself. He is able to dissuade many enemies with firecrackers, but many just have to be avoided.

The game has 21 levels, each one representing a real-life "station" (a town in which to rest) on the road from Kyoto to Edo:

Once a player collects ten coins a secret doorway will appear. If they choose to go through they will be randomly transported to one of two warp zones. Depending on which warp zone is displayed Kantaro will be able to skip three or six levels, the latter of which is much more difficult to complete and contains some of the hardest enemies in the game in rapid succession. 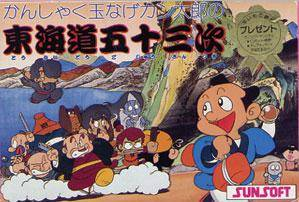