Knightmare is vertically auto-scrolling shoot 'em up that mixes traditional fantasy with Greek mythology, made by Konami for the MSX system in 1986. It features the warrior Popolon on a quest to find the Nightmare Castle, where the the evil priest Hudnos is holding his love, Aphrodite, captive. The game has 8 levels, each with a boss fight at the end.

In the Japanese release, Aphrodite is a Greek princess captured by the evil priest Hudnos, and Popolon sets out to rescue her. This is the canonical story that the subsequent games in the franchise build upon. The manual for the English release had a considerably embellished plot, summarized below, making Aphrodite the goddess and tying the game more directly to Greek mythology.

The Goddess Aphrodite has been captured by the King of the Underworld and is being held in his Nightmare Castle. Deeply in love with her, the warrior Popolon sets out on a quest to rescue her. However the Castle is hidden, and Popolon is plagued by nightmares of thousands of monsters tormenting his love while blindly searching for it.

Then one night the Goddess Hera speaks to him, showing him a path to his goal beyond the slopes of Mount Atos, and revealing to him the power of the magic jewels and crystals. With renewed spirit, Popolon sets off towards the Castle, to face the horrors within.

The game is viewed from a top down perspective, and the battlefield auto-scrolls vertically at rapid intervals in consistent chunks. The player is free to move around the battlefield, though certain obstacles like water and walls will block his progress. Waves of enemies appear frequently, and the player must avoid or destroy them, gaining bonus points for taking out a whole formation. At the end of each level awaits a boss, which must be defeated to progress.

Popolon starts out with 3 lives, and gains an additional one for each 100,000 points earned. He has no health, and dies upon contact with an enemy or projectile, or if he is blocked by an obstacle and scrolls off screen. Once all of his lives are used up, the game is over and the player is forced to restart from the beginning.

Popolon is armed with a single arrow shot, which can be changed or upgraded by picking up a weapon crystal. The crystal appears as floating black and white flashing ball, and will cycle through the available weapons when fired upon. Picking up a new weapon will grant its basic form, picking it up a second time will grant the upgraded form.

Popolon can temporarily gain additional powers from power crystals. It initially appears as a floating black ball with a white P on it, and as with the weapon crystals, it offers additional powers that can be cycled through by firing on it.

Placed on the battlefield are magic jewels that can help or sometimes hinder Popolon. Some are hidden, others are visible as tiles with question marks on them. Both types are uncovered by shooting at them until they reveal their contents. 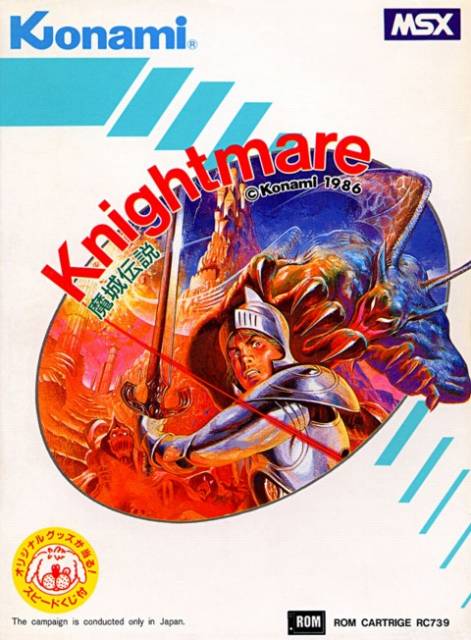