Famicom Jump: Hero Retsuden is a 1989 action RPG for the Famicom (NES) console published by Bandai, based on the popular weekly Japanese manga anthology Jump and its characters. The combat system was in real-time with martial arts.

Famicom Jump: Hero Retusden (sometimes Famiom Jump: Eiyuu Retsuden) is an RPG that follows the adventures of a young Jump fan after he is mysteriously drawn into the world of the comic. In order to defeat the various evils plaguing the comic world and find his way home, he must locate 16 of the comics' protagonists and request their help. Occasionally this means solving puzzles or helping them with their issues before they will join.

Famicom Jump was a joint project by Bandai and Jump magazine to celebrate the latter's 20th anniversary. It celebrates many of the comic's then-current and former licenses by including their heroes and villains as cameos.

One of the main objects of the game is to gather a selection of 16 notable Jump hero characters in order to use them to fight against the enemies in this world. The Jump characters that can be collected are: 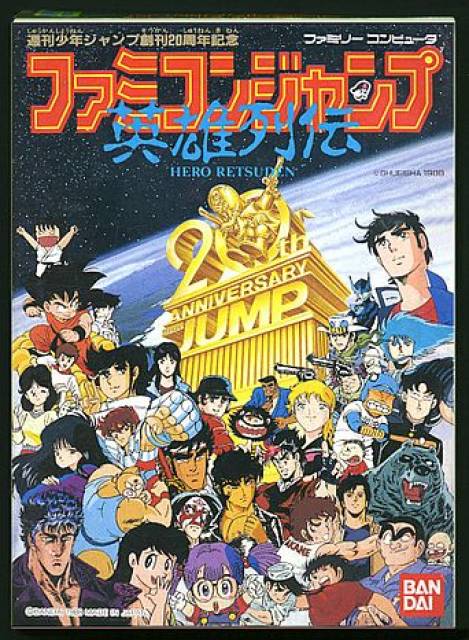