Falling blocks and word games collide in this iOS release.

A combination of gameplay from word games, Tetris and match-3 games, Puzzlejuice has the player control a barrage of falling tetrominoes. When 3 or more adjacent blocks of the same color are tapped, or a row of blocks is formed, those blocks become letters. By dragging from one letter to another in any direction and forming words, the word, and other blocks around it are removed.

The player is challenged with a set of 3 objectives which must be completed in Core Mode (after the 2nd set, they must also be completed on the Euro Extreme difficulty). Some challenges include: forming a 6-letter word, reaching a score of 3,000,000, reaching a combo level of 200x, forming 20 words without creating a row, and reaching speed level 15. When a set of objectives are completed, a new powerup is unlocked. 3 of these can be taken into a game at once, and they will appear instead of a single block in one tetromino. By using it in a row, the effect of the powerup will be triggered. 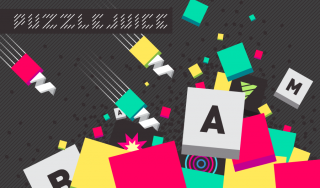