Phantom Brave is a strategy RPG for the PlayStation 2, and the first game to be published by NIS America.
PlayStation 2

Phantom Brave is an RPG with light tactical elements, akin to games like Final Fantasy Tactics. Characters can be moved around the battlefield, performing spells or abilities in a turn based style. Originally released on the PS2, a port was recently released on the Wii in Japan, with talk of a version coming to the rest of the world shortly (with the subtitle 'We Meet Again').

The game features a few similarities to Disgaea, with some Disgaea characters even popping up as cameos in the end-game dungeons.

Similar to Final Fantasy Tactics and Tactics Advance, battles are viewed for a skewed top-down, or isometric perspective, allowing the player to effectively view the proceedings, and move characters around. Unlike other games that implement an isometric viewpoint, however, the game does away with any grid based movement system, allowing characters to move freely, so long as they have enough DM (or, 'Distance Moveable'). Different terrain has differing properties, which can affect the amount of DM consumed when moving on it, the distance a character 'slides' before stopping, or high a character bounces when leaping off a ledge onto it. The gridless system also means characters can be knocked clean out of the battlefield, unable to return until the current bout is over. Occasionally, when an enemy is knocked out in this way his allies are all powered up slightly, meaning players have to can replace multiple small threats with one larger one.

Another departure from the classic Turn-Based-Strategy formula is how allies are summoned to the field. The main protagonist, Marona, can 'dispatch' (aka Summon) a multitude of phantasmal allies onto the field to aid her in the battle. The twist is that phantoms must be 'bound' to an object of the players choosing, which grants them stat boosts depending on the object. For example, a Fighter phantom might be best placed on a rock, granting them additional defence. Depending on the phantom, they will return to the ether between one and ten turns after being summoned to the field.

Phantoms can also have a postive effect outside of battle. Marona can return home to Phantom Island, where the Phantoms she has summoned to help her will populate the island, and offer services. For example, some may double as merchants, and others may create a randomly generated dungeon for the player to train in.

Marona, the protagonist of Phantom Brave, abides to many of the traditional clichés you'd expect from an RPG. An orphan from a young age, she lost her parents in a battle against a being known as Sulphur on the Isle of Evil. Her parents dying wish was for Ash, someone who had come with them to the Isle of Evil but managed to get away as a Phantom, to look after their daughter Marona. Luckily, Marona has the ability to see phantoms, something that the majority of others lack. Due to her ability, she is feared by others. As a consequence, her and Ash live alone together on Phantom Isle. 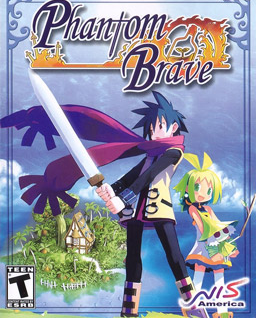