Build a monumental empire (that can stand the test of time) in this turn-based strategy game by MicroProse.

Sid Meier's Civilization is a turn-based 4X strategy game developed and published by MicroProse for MS-DOS in 1991. Designed by Sid Meier, it is the first game in the long-running series of the same name and the first game to popularize the 4X (explore, expand, exploit, and exterminate) sub-genre of strategy games. Players take on the role of a ruler of a civilization (loosely based on real-life historical civilizations) and is challenged to build it up amongst other empires (from two to six), from the end of the prehistoric era to the technological future.

Over the years, the game received ports to the Mac, Amiga, Atari ST, Super Nintendo Entertainment System (published by Koei in the United States and by Asmik Ace in Japan), PlayStation, Saturn (published in Japan only by Asmik Ace), and N-Gage. A special port for the Windows, titled Sid Meier's CivNet, was released in 1995, featuring online multiplayer.

Sid Meier, a founder of MicroProse and veteran game designer, had established his name in the industry with such titles as Pirates!, Railroad Tycoon, and a variety of flight simulators. Drawing inspiration from two board games, Civilization from Avalon Hill and Risk, and two recently released computer games, Populous and SimCity, Meier set to work with Bruce Shelley on Civilization.

While the game would see release via MicroProse, and Meier was a co-founder of the company, at the time of Civilization's creation, Meier was not an employee of MicroProse. Meier's former MicroProse partner, Bill Stealey, had changed the direction of the company away from PC games and into the home console and arcade market. Meier jumped ship prior to MicroProse going public.

Inspired by their work on Railroad Tycoon, a deviation from their normal flight combat and military strategy games, Meier and Shelley began programming Civilization on an IBM PC in 1990. This began soon after MicroProse cancelled the sequel to Railroad Tycoon. Meier personally handled all the programming and coding and all of the art for early incarnations of the game. The game became an all-consuming project, and Meier kept a notepad near his bed in case of sudden inspiration.

Development occurred in cycles. Meier would develop a functioning prototype, hand it over to Shelley and they would dissect it until Meier went back to programming. The partners were the only ones involved in the early design process, with Meier unwilling to involve any other people until he was ready.

An early incarnation of the game drew heavily from the duo's work on Railroad Tycoon and was equally inspired by SimCity. It was originally real-time based on zoning: players would choose areas for specific purposes and watch as their civilization slowly grew.

At this moment in time, development was halted. Stealey, a former pilot, had developed MicroProse on the strength of flight simulators, and had little interest in other games. He was not particularly happy with the release of Railroad Tycoon, and Civilization would never had gotten so far if it were not for the previous game's success. Meier's status as a contractor, as opposed to employee, allowed the development of Civilization to continue. However, Stealey stepped in and refused to back the game, unless Meier and Shelley finished Covert Action, a action spy game that was set aside in favor of Railroad Tycoon.

After Covert Action was finished, the team went back to Civilization where it saw the addition of its most important elements. First, the team incorporated turn based play. Zoning was abandoned and military strategy was added. Individual units were added that could be manipulated to various tasks. Meier also included the technology progression tree. During this time, little historic research was used. Instead Meier used popular conventions in how the public understood history, and incorporated these elements into his technology tree. With these additions to Civilization, the game was ready to leave the hands of Meier and Shelley.

Due to the low priority of Meier's games at MicroProse, they had trouble securing the help they needed. It was only grudgingly that the company allowed the art team and play testing team to work on it.

During this phase of development, the map was halved in size, large portions of the technology tree were removed, and units were removed. Prior to shipping however, Shelley developed the in-game reference guide, the Civilopedia, as well as the massive user manual.

In 1991, the game shipped. It was late and saw very little promotion. However, on the strength of critical acclaim and word-of-mouth excitement, the game took the imagination of gamers everywhere and spawning a million selling franchise.

The player takes on the role as a ruler of a civilization and is challenged to build an empire amongst up to six other civilizations. The game begins at the end of the prehistoric era, 4000 BC, in a world without cities. The player starts with one or two Settler units to build his empire with. The cities that the player builds and micromanage will determine the success of the empire.

In order to win the player is forced to explore the world, wage war and participate in diplomacy. The player must also decide where to build new cities, which city improvements or units to build, and which new advances in knowledge to take.

As new knowledge is acquired, new units and improvements will be available to the player. Getting ahead in the technology race is a great advantage to the player.

There are special city improvement in the game called Wonders of the World. They can only be built once in the world and gives an advantage to the civilization that builds it.

The game is won when the player has destroyed all other civilizations, reached the end of the modern era (2100 AD) with the highest score or won the space race by reaching the star system of Alpha Centauri first.

Players can select amongst 14 historical civilizations to play. The difference between them is mostly cosmetic. The choice will determine titles, city names, musical heralds and color. 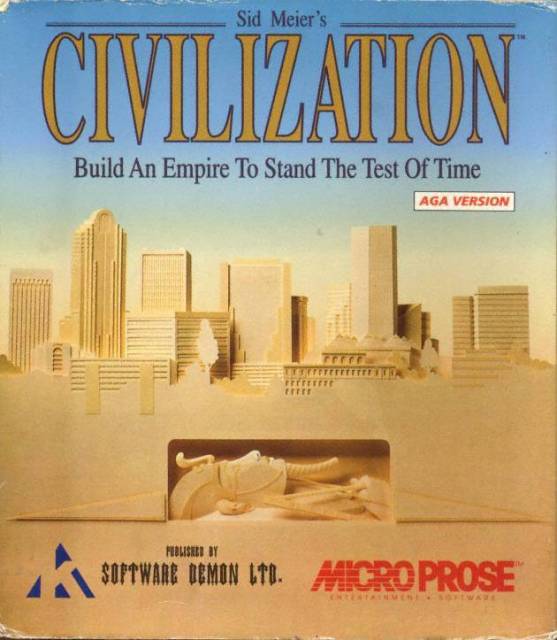