The story of Pokémon Black/White continues in this direct sequel for the Nintendo DS system.
Nintendo DS

Pokémon Black/White 2 is a sequel to Pokémon Black/White, and the first direct sequel in the series' history. Black/White 2 features 300 Pokémon from the start including — unlike Black/White which featured an all new roster of Pokémon — creatures from previous games such as Psyduck, Lapras and Arcanine. There are also two new forms of the legendary Pokémon Kyurem: White Kyurem and Black Kyurem. Each new form has a signature move with White Kyurem knowing Ice Burn and Black Kyurem knowing Freeze Shock. Unova has changed since its debut in Black/White with major parts of it covered in thick ice and many updated locations.

Pokémon Black/White 2 was formally announced by Junichi Masuda on the Japanese television program Pokémon Smash on February 26, 2012. At first, very little information was revealed other than the Japanese release date, and the alternate black and white versions of the legendary Pokémon Kyurem.

Pokémon Black/White 2 is the last Pokémon game for the Nintendo DS; it's successor, Pokémon X/Y, was released on the Nintendo 3DS in October 2013.

Pokémon Black/White 2 is set two years after the events of the first game, Pokemon Black/White. It features brand new locations, a new trainer, gym leaders and a new rival for the player. Team Plasma returns as the primary antagonists.

The game begins not in Nuvema Town but in Aspertia City, a new city introduced in the generation five sequels. Like the majority of main series Pokémon games, you start your adventure in your house. Your mother tells you to go meet Professor Juniper's assistant Bianca to receive your first Pokémon and Pokédex. As you leave your house, you are greeted by your friend and rival Hugh. Hugh already has a Pokémon, which he raised from an egg. He decides to assist you in finding Bianca.

When finding Bianca at Aspertia Outlook, she offers you a choice of three Pokémon, Snivy, Tepig and Oshawott . She also hands you a pokédex and luckily for Hugh, has one for him too. After battling Hugh, he leaves and Bianca assists you by giving you poké balls and teaching you to capture Pokémon. You meet your mother, who hands you the running shoes, and Hugh's sister who hands you two town maps. One for you, the other for Hugh.

After progressing to Flocessy Town you meet Alder, the former champion of Unova. He offers to help train your Pokémon and tells you where Hugh has been seen. When entering Flocessy Ranch, Hugh challenges you to another battle. After the battle you are asked by the owners of the ranch if you have seen their Herdier. Hugh is furious at the couple for their carelessness and rushes off to search for the herdier. When you reach the herdier you find it is being cornered by a member of Team Plasma. Hugh runs to tell the owner and the Grunt manages to escape.

You return to Aspertia City to challenge the gym leader, Cheren. After defeating Cheren, you leave the gym with him finding Bianca outside waiting for you. The three register each other in their Xtransceivers. You are also given Professor Juniper's number. Hugh unexpectedly shows up and challenges Cheren. Cheren leads Hugh into gym and Bianca informs you of the location of the next gym in Virbank City.

When approaching the Pokémon Center in Virbank City, you see the gym leader Roxie arguing with her father over his decision to stop ferrying people to Castelia City and become an actor at PokéStar Studios. After defeating Roxie for the Toxic Badge, you are approached by a scout from PokéStar Studios, Roxie overhears and rushes off to retrieve her father. Upon reaching the studio you are introduced to the manager of PokéStar Studios, Stu Deeoh. It is here you find out Roxie's father has already starred in a film. However, the audience is not impressed with his performance and he returns to Virbank City a disappointed man to continue his job. After costarring in a film with the former gym leader, Brycen, you return to Virbank City.

When you try to enter Castelia City Gym, you learn that the gym leader, Burgh, is not there. Just then, the former Opelucid City Gym Leader, Iris, shows up and she tells where Team Plasma might be hiding. Iris leads you the sewers of Castelia. Hugh follows you to the sewers and you team up together to go look for Team Plasma. After finding and defeating a pair of Plasma Grunts, they run off citing they've already captured the Pokémon they were looking for. Hugh is eager to look for more of Team Plasma but Burgh arrives saying that Team Plasma had fled the sewers. Hugh leaves but a strange man in a white labcoat approaches you and applauds the way you battled.

Like other Pokémon sequels, Black/White 2 contain a handful of new features:

Like the Generation IV minor sequel, Platinum, Black/White 2 adds new forms for existing Pokémon. These forms change not only the appearance of the Pokémon, but also their stats and in some cases, abilities and movesets.

Some locations vary between the two versions, with aesthetic differences being the most obvious, but events at these locations can also differ.

The game's thumbs will be animated.

The C-Gear shows the system power using three bars in a battery icon, rather than two on older Nintendo DS systems. 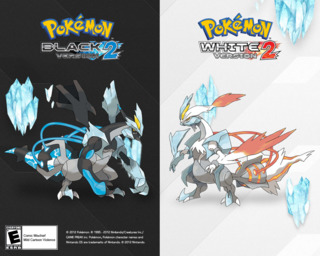