Frogger gets the Pac-Man Championship Edition treatment and then some in this update from Zombie Studios.
Xbox 360 Games Store Wii Shop PlayStation Network (PS3)

In addition to classic Frogger, Frogger: Hyper Arcade Edition includes six additional game modes, twenty challenges, and the ability to change the style from the 8-bit style of the original arcade game to a next-gen style or to mimic the style of several other Konami games.

In classic mode, Frogger must dodge traffic and avoid water to get to the lily pads at the top of the screen.

A multiplayer mode where each player attempts to capture the lady frog in order to gain the ability to kill the other frogs. The last player to lose all of his or her lives wins.

A multiplayer mode where each player attempts to get the most lady frogs to the safety of the lily pads. In this mode, a frog can carry up to three lady frogs at a time.

In paint mode, Frogger must avoid traffic while hopping onto colored tiles to make a pattern. If the player hops off the pattern, then the player loses a life.

Like classic mode except instead of controlling one frog at a time, the player controls two frogs simultaneously.

In Frogger Freak Out, the player plays a random game mode each round while scoring 100 points every round. 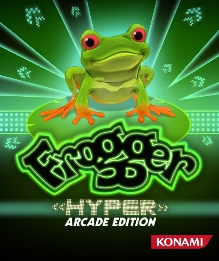