Laura Harris' father has gone on a killing spree and taken a hospital hostage. Now she must find out why and she only has two hours to do it. She will explore the darkness of her father's past--and the truth about her entire family--in this real-time adventure from 1995.

D is among the first games developed by WARP, Inc. and its late founder Kenji Eno, after some more standard video games. The game was actually titled D's Dinner Table ("D no Shokutaku"), but was released in English regions simply as "D".

D was a breakthrough title for Warp, pushing the boundaries of video games, with first-person survival horror, FMV pre-rendered movement, puzzle-solving gameplay, a disturbing atmosphere, and taboo content such as violence and cannibalism.

D is an adventure game in which the player controlls main character Laura Harris, who must find out why her father has gone on a murderous rampage and is holding hostages in a hospital. The game uses pre-generated computer graphics and full motion video to tell its story. The player has two hours to solve the mystery of why Laura's father went on his bloody massacre. The player manipulates the Laura character from both a first person and third person perspectives.

The game has several endings, a time's up ending, a good and bad ending, and a 100% completion ending. The ending a player witnessed was based on their actions throughout the game. The 100% complete ending includes the good ending and the addition of the sounds of a newborn baby crying. Some players inexplicably concluded that this sound of a baby crying meant that the visibly not pregnant Laura gave birth at the end of the game, a storyline development that some misguidedly believed would lead directly into the sequel, D2.

D was originally released on the 3DO console and was later ported to the Playstation, Sega Saturn and PC by Acclaim. The game had a very high sell through rate on all those consoles except for the Playstation. The game was considered a sensational hit in Japan.

It is rumored that the Playstation game received the most pre-orders, but Sony failed to produce enough copies of the game to meet the demand. Eno decided to sever all further ties with Sony for further WARP developed games. Eno said in an interview with 1UP.com in 2008 "So the sales people had gotten 100,000 preorders from retailers, but Sony wasn't able to manufacture all of them. I was very pissed about that, because one title like that for a small company is very important. If that game doesn't sell well, then that's very bad for the company."

The sequel to D, D2, was originally designed as a direct followup to D. Not only that, it would also be among the first games developed for the M2, 3DO's video game platform designed to follow up on the original 3DO and to be manufactured by Panasonic.

Because the M2 was cancelled by Panasonic and never came to fruition, the original design for D2 was also cancelled. The original M2 design of the game had it set years after D, and begin as Laura Harris's unborn child is stolen from her by otherworldly power. The child is then miraculously aged and transported back in time to a medieval castle that the player, as the child, must escape from. Some believe that this game as originally intended was more directly related to the first game, it being related to the sounds of the newborn baby that were featured in one of the endings of the first game. The concept was dropped in the process of the game's redesign. 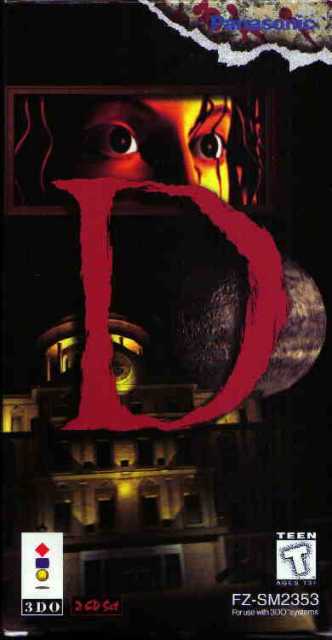