A non-corporeal protagonist meets historical figures while travelling through time trying to recover his body from an evil demon in this Famicom Disk System adventure game.

Time Twist: Rekishi no Katasumi de... is an adventure game for the Famicom Disk System in which the protagonist is a disembodied ghost trying to track down his body, which has been taken over by a time-travelling demon. The demon is wrecking havoc across various points in history and the player, as the boy's spirit, has to try and stop it. The player has at their disposal the unique ability to possess various animals and people as well as the usual set of menu-driven commands common to Famicom adventure games.

Time Twist would also be the very last game developed by Nintendo for the Famicom Disk System peripheral and was also the last packaged game to be sold for the device. Later games for the peripheral would be sold entirely through the Disk Writer service. Time Twist itself would eventually be sold via the Disk Writer service as well, as packaged versions were in short supply and have since become something of a collector's item as a result. 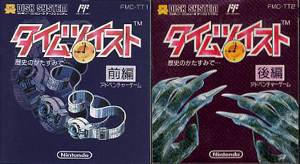