A young cyborg known as the Biomech must save the remainder of humanity from robotic forces in the distant future. A platformer/shooter for the SNES, released late in the console's lifespan.

Realm is a side-scrolling platforming shooter released near the end of the SNES era. Players control a long haired blond cyborg in his quest to defeat aliens. The player can plant themselves and shoot in multiple directions, and also find power-ups that provide stronger weapons with a finite amount of ammo.

The game was released in both North America and Europe and published by Titus Interactive, which also published their fantasy platformer Incantation the same month.

The player controls a teenage cyborg only known as Biomech. His task is to push back the invading alien forces threatening a futuristic Earth, and he begins at the last bastion of human resistance nestled in the forest. Fighting endless hordes of aliens with any weapons found, he must infiltrate each of the four "realms" now under alien control. His only hope in saving earth is in defeating the leader of the aliens residing in a battle ship orbiting earth.

The player has a wide array of weapons that are found within levels however only two weapons can be help at once. All weapons have ammunition except for Biomech's starting pistol. Ammunition can be acquired by either collecting another instance of a weapon or by shooting yellow crystals commonly found throughout the game. The player can collect shield symbols to increase health as well as a power-up providing temporary invulnerability. Any contact with enemies will result in health loss and falling into canyons or off the level results in an instant loss of life. Each realm has a preliminary boss then a final boss before moving to the next area.

Although there are many weapon types, players often use the LC-30 and AD350. A common strategy is to acquire the AD350 "heat-seeking" gun and simply shoot straight up, while avoiding enemy fire. This allows the player to focus solely of the platforming aspects of the game. The LC-30 is often saved for boss encounters as it is the highest damage weapon with a constant stream of fire. 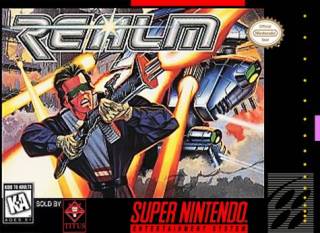