An arcade shoot 'em up from Taito featuring a golden dragon with a multi-segmented body. Released for the Arcade, Sharp X68000, and SNES.

Syvalion is a Taito shoot 'em up that bucks trends by removing the forced scrolling and allowing the player to move in any direction at any pace they wish. The protagonist is a golden metallic dragon with several trailing segments that can breathe fire in eight directions to destroy enemies - the trailing segments make it vulnerable, so the player needs to keep moving to stay out of harm.

The game was originally released in Arcades in 1988. It was later ported to the Sharp X68000 in 1990 and the SNES in Japan and Europe in 1992/93 - an American SNES version was planned but cancelled. In 2006, Syvalion was eventually re-released for the PlayStation 2 as a part of Taito Legends 2, which made it available to US audiences for the first time.

Darius Burst, from Taito's acclaimed Darius series, features a boss will multiple forms. One of the forms greatly resembles the metal dragon of this game. 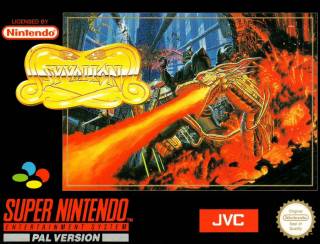