A Sumo Wrestling simulation game developed by Tecmo for the Famicom. It is the first in a series and one of the earliest Sumo games.

Tsuppari Oozumou essentially means "Shove Sumo", Tsuppari being a move performed by Sumo wrestlers to push their opponent out of the ring. The game works like any other tournament-based fighter: The player character must fight a series of increasingly difficult opponents until they reach the top and are declared Yokozuna: The highest rank of Sumo.

The Tsuppari Oozumou series would later see a PC Engine graphically-enhanced remake and a Super Famicom sequel. There is also a Wii Shop reimagining of sorts.

The player has two moves at their disposal: A shove attack that will send an unprepared opponent reeling backwards and a grapple move that will wear down the opponent's stamina. With the judicious use of both attacks, the player must move the opponent to the edge of the ring and then find a way to push them out after draining their stamina.

Between matches the player can take part in training exercises, such as eating a lot of rice, in order to refill and increase the player character's stamina bar. 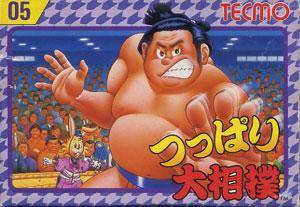