A graphical adventure game that takes place on a mysterious island. It was one of the first games published on CD-ROM and was notable for its extensive use of pre-rendered 3D graphics, which were considered cutting-edge at the time.

Myst is a puzzle adventure game designed by brothers Rand and Robyn Miller. It was developed by their company Cyan (later known as Cyan Worlds) and was originally published by Brøderbund in 1993 for Apple Macintosh computers. Players explore a pre-rendered game world using a simplified point-and-click interface in order to solve puzzles and unravel the secrets of Myst, a deserted island connected to several other worlds via special "Linking books".

The game was originally programmed in HyperCard, a "hypermedia" programming tool available for legacy Macintosh and Apple IIGS computers. This tool was capable of producing applications that function similarly to simple HTML webpages.

Myst was one of the first games released on CD-ROM and heavily contributed to the format's early success in terms of interactive software. After its release for IBM-compatible PCs in 1994, Myst quickly became the best-selling PC game of all time until The Sims broke its record in 2002. The original game became the basis for a highly successful media franchise that spawned four direct sequels, several spin-off games and three novels.

Myst's gameplay is exclusively point-and-click from a first-person perspective. Players explore the world of Myst by clicking on sections of hundreds of static pre-rendered scenes, and can interact with certain objects in the world by clicking or dragging them with the mouse cursor. Myst's limited animations are videos embedded into these pre-rendered backgrounds, giving players a greater sense of immersion despite the limitations of CPU processing power available for the game's initial release. Because all of the scenes were pre-rendered, the game's artists were able to portray the worlds of Myst as highly detailed 3D environments, which wouldn't have been possible if the game had instead been rendered in real-time.

The player is presented with many puzzles that must be solved in order to progress, some of which are integrated into the environment and may not be immediately apparent as puzzles. There is no explicit violence, no time limit and no threat of death; the world of Myst is serene and designed to immerse players in its atmospheric presentation as they uncover the secrets of the mysterious island at their own pace.

Myst begins with an opening cutscene narrated by an unidentified man (later established to be Atrus, one of the franchise's central characters) as he describes his plunge into a black "fissure" full of stars. The man is only able to catch a brief glance at his surroundings before suddenly vanishing, leaving behind a mysterious book that continues its descent through the expanse of stars. He apprehensively speculates about where his book may eventually land before admitting that such conjecture is futile, finally concluding that "perhaps the ending has not yet been written".

The player character, known unofficially as "the Stranger," discovers Atrus' lost book. When the Stranger opens the book and touches an animated image on the first page, they find themselves transported to the surreal island of Myst. The Stranger must explore the seemingly deserted island in search of clues regarding its former inhabitants and their purposes, ideally discovering a way back to their home on Earth in the process.

Eventually the Stranger enters a small library containing several books, many of which have been burned to the point of illegibility. However, the library also holds two conspicuously undamaged books - one red, one blue - that each appear to contain a person trapped inside. They are Sirrus and Achenar, a pair of brothers and the sons of Atrus. The books that have imprisoned Sirrus and Achenar are missing several of their pages, causing their animated Linking panels to become obscured by rolling static and making communication very difficult. By restoring the missing pages to both books, each brother's speech becomes clear enough to claim that the other betrayed both Atrus and himself, presenting the Stranger with the dilemma of whom to trust. The Stranger is tasked with finding the brothers' remaining pages in order to progress toward the game's conclusion.

Continuing their investigation, the Stranger discovers several additional Linking books hidden throughout Myst Island behind a series of meticulously constructed puzzles. Each book transports the Stranger to a different world known as an "Age," where they must solve the Age's resident puzzles before returning to Myst Island with either a red or blue page in hand. The Stranger can uncover further clues as to what exactly happened on Myst along the way, including several journals and notes written by Atrus. A recorded holographic message addressed to his wife Catherine mentions Atrus' burned library on Myst, as well as his suspicions that one of his own sons is responsible for its destruction.

By returning additional red or blue pages to their respective books on Myst Island, each brother's communications gradually become clearer as they both continue to decry the other's treachery. Once the fifth page of either book has been returned, the book's occupant recounts their own version of the events leading to Atrus' death. He also reveals the location of a code book leading to a secret chamber inside the library containing the final red and blue pages. While each brother implores the Stranger to only retrieve their own respective pages, both Sirrus and Achenar warn the Stranger not to touch a certain green book which is also located in the secret chamber. They claim it is yet another prison book created by Atrus, much like the two they are currently trapped inside, and that the player will also be trapped if the green book is opened.

The Stranger is thus given three options: return the red page to Sirrus, return the blue page to Achenar, or ignore both brothers' warnings and open the green book. In the end, both brothers prove to be completely untrustworthy; several clues can be found throughout the game's different Ages implying that both Sirrus and Achenar became twisted, cruel individuals bent on abusing and exploiting these Ages and their inhabitants. If the player ignores these hints and restores the final page to either the red or blue books, they will find themselves sucked into the book as its previous occupant is simultaneously released. Sirrus or Achenar thanks the player before proceeding to gleefully rip the pages from their former prison book, thereby trapping the Stranger inside indefinitely.

Players that investigate the green book instead are presented with a linking panel displaying an image of Atrus, very much alive and sitting behind a writing desk in an unfamiliar location. He quickly warns the player not to link to "D'ni" (later retconned to be a section of the subterranean D'ni City known as K'veer) before describing how his sons were corrupted by greed and a lust for power, leading the two brothers to trap both Catherine and himself in separate prisons so that they could lord over Atrus' written Ages without restraint. Atrus begs the player to ignore their lies and retrieve the single white page torn from his own damaged linking book so that he can return to Myst Island and deliver justice to his scheming sons.

Linking to D'ni without the white page will cause Atrus to bemoan the Stranger's stupidity and the fact that, without a way out, they will both be trapped there forever. If the player instead locates the hidden page on Myst Island and returns it to Atrus, he will use the page to repair his Myst linking book, stating that he faces a "difficult choice" before linking back to Myst himself. After a few moments, Atrus reappears in D'ni and tells the Stranger "it is done". However, he reveals that his wife Catherine is still trapped and fears that his own long imprisonment may have had a "catastrophic impact" on the world in which she is being held hostage (this is established to be the Age of Riven in the game's sequel). Atrus offers his library on Myst and the exploration of his surviving Ages as a reward to the Stranger for their help; he also mentions that he may require the Stranger's assistance again in the future.

After Atrus' speech, players may return to Myst Library via Atrus' linking book. Two large burn marks can now be found where the red and blue books once sat, implying that Atrus has destroyed his sons' prison books permanently.

The game has been remade on the PC twice. Once remastered in 24-bit color with enhanced sound as Myst: Masterpiece Edition, and again as realMyst, which was a full recreation of the game in Cyan's real-time 3D engine called Plasma.

Myst: Masterpiece Edition and realMYST are available to purchase digitally, DRM-free, courtesy of GOG.com since 2009. The game has also been ported to a variety of consoles and handhelds, including the Sega Saturn, Sony Playstation, Atari Jaguar, CD-i, 3DO, PSP and the Nintendo DS.

The port of Myst for the iPhone was released for the Apple iPhone on the App Store for $5.99 on May 2nd, 2009. This copy features the full original game with improved graphics and contains the original sounds and soundtrack.The iPhone version also features auto-zoom, the original cinematics, swipe-to-turn, and all of the original ages and gameplay.

A 3DS port has been announced for release on April 24, 2012 in North America. Called "Myst 3D," most of the gameplay will take place on the bottom, 2D screen, with some discovery gameplay in 3D on the top screen. This port is being handled by Maximum Family Games.

Myst: The Soundtrack was composed by Robyn Miller and released by Virgin Records on October 6, 1998. Miller later released a remastered version of the original soundtrack on June 6, 2013, which is available online through various digital storefronts. 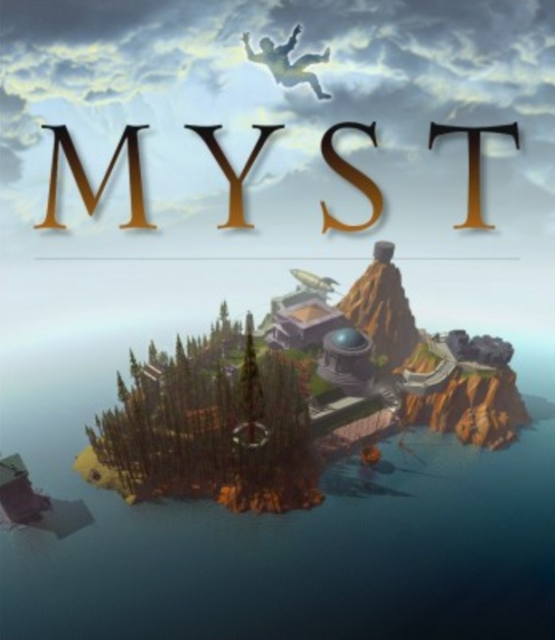