A sequel to the original Ninja-Kid (Ninja-kun), Ninja-Kid II is a side-scrolling platformer action game for Arcades. It is also known as Rad Action and JT-104, and was later ported to the NES in Japan only.

Ninja-Kid II was originally an Arcade game produced by UPL and based on the original Ninja-Kid. The series is known as Ninja-kun in its native Japan, but was changed to "kid" as the honorific is meaningless to westerners. It is unrelated to Ninja-kun's other sequel, Ninja JaJaMaru-kun, which features Ninja-kun's younger brother and branched off into an entirely separate spin-off series. It is also unrelated to Ninja Kid, which was the localized name of the first NES GeGeGe no Kitarou licensed game.

As well as Ninja-Kid II, the arcade game was also known as both Rad Action and JT-104.

In Japan, the game was eventually ported to the Famicom and MSX with its original name: Ninja-kun - Ashura no Shou (translates from Japanese as "Ninja Kid - Chronicle of Ashura"). An American NES release was planned, with the name Ninja Taro, but it fell through. Instead, a Game Boy Ninja JaJaMaru-kun game would use the Ninja Taro name.

As with the original Ninja-Kid, the goal of each stage is to defeat the many enemies roaming around by first reaching them and then throwing ninja stars at them. Ninja-kun can also acquire scrolls that briefly give him stronger attacks, like a fire burst that takes out all nearby enemies.

Each stage (or "scene") has a different layout, with some being merely a single screen (such as Scene 1) as well as larger vertically- and horizontally-scrolling stages. The enemies are usually different too, with increasing difficulty. 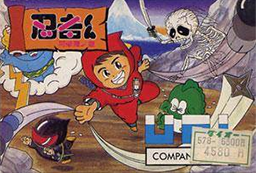