A baseball simulator from Taito, developed for the Famicom in 1988. It was never released outside of Japan.

Kyuukyoku Harikiri Stadium is a Famicom baseball game published by Taito, though the exact developer (Taito generally outsourced their Famicom games to independent developers like TOSE or Micronics) is uncertain. The name actually means something like "Ultimate Excitement Stadium" and "Harikiri" is not to be confused with "Harakiri", meaning ritual suicide by disembowelment. For one thing, baseball bats are too blunt.

The game uses the then-standard baseball game mold, popularized by games like Pro Yakyuu Family Stadium (RBI Baseball) and Moero! Pro Yakyuu (Bases Loaded). Both batting and pitching are viewed from behind the position the player currently occupies, and the screen switches to an overhead view of the field once the ball has been hit. All fielders move when the D-pad is pressed, rather than the player controlling just the closest. 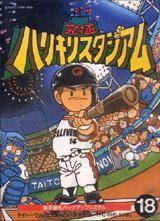