A baseball game developed and published by Sega for the Sega Master System. It was never released outside of Japan.

Nekyuu Koushien ("Hot Pitch Koushien", Koushien being a Japanese sports stadium usually reserved for high school baseball nationals) is a baseball game developed by Sega for their home console the Sega Mark III (known in the west as the Master System). It follows the standard baseball sim set-up of having a close-up view of the batter as they take their swings, before zooming out to depict more of the field upon a successful hit which allows the player to see the fielders and diamond more clearly.

Besides quite a few voice samples, which were still rare for console games in the late 80s, there is little to distinguish the game from its many contemporaries. However, it is competently made and has many player-friendly touches (such as having fielders already heading towards fly-balls before control is handed over to the player) and is therefore regarded as one of the better baseball games for the system. 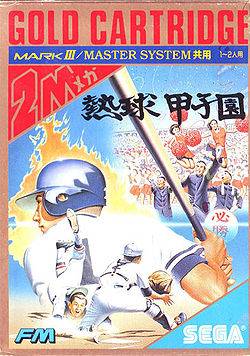