A NES brawler based on the Shounen Jump manga. It was developed by TOSE and published by Bandai.

Sakigake!! Otokojuku: Shippu Ichi Gou Sei is the first video game adaptation of the manga Sakigake!! Otokojuku, about a private school that teaches troubled teens ouendan - a form of male cheerleading that involves percussion instruments and chanting, best known to western gamers as the core mechanic of the Osu! Tatakae! Ouendan/Elite Beat Agents games. Both the manga and the anime series - which came out close to this game's release and is assuredly its main inspiration and reason for its existence - is extremely violent as well, and the game's nature as a brawler emphasizes this aspect.

The player can select between four main characters, however they all look and play identically. Most of the game is a 2D side-scroller, though the game will switch to a depth-enhanced field - such as that seen in Double Dragon or Final Fight - for its boss battles. 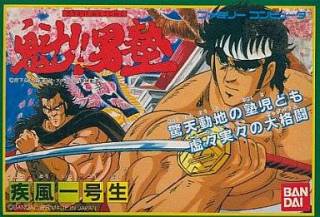