A Commando-style vertical-scrolling shoot-em-up with a few novel features. It was developed by TOSE and published by Jaleco for Arcades and the Nintendo Famicom.

Field Combat is a vertical-scrolling shoot-em-up that plays like Capcom's Commando. It was developed by TOSE and published by Jaleco for both the Arcade and Nintendo Famicom, neither of which saw a release outside of Japan. The Famicom version would be rereleased years later on the Wii Shop's Virtual Console.

Players steer the UFO-like Genesis ship towards the top of the stage, where the enemy's artillery awaits. On the way, the Genesis is accosted by the enemy armies, in red, and can send out their own units, in blue, to assist them in combat. Additionally, the Genesis can fire destructive rockets and also a grapple beam which, if it grabs an enemy, will capture them and turn them to the blue side. Destroying the enemy's artillery allows the player to move onto the next stage. 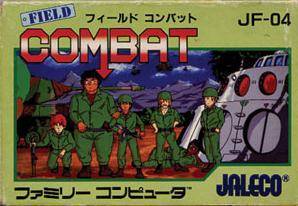