A first-person shooter and cockpit-view space shoot-em-up developed by Namco, and released for the Arcade and Nintendo Famicom platforms in 1985.

Star Luster is a space sim/shoot-em-up for the Nintendo Famicom (and much later, the Sharp X68000) that uses the Star Raiders model of having everything viewed first-person from the cockpit, and having to manually select which region of space to visit next and travel there by hyperspace. The goal is to intercept the "E"s on the starmap, which stands for "Enemies". The player can also visit friendly space stations (represented as "B"s, for "Base") to refuel and repair damage. The player can also opt to use one of their limited torpedoes to target an enemy region remotely, though this tactic must be used sparingly.

In combat, the player must roll, pitch and yaw their craft to center the enemies on their screen before shooting them down. The player's map changes to a radar in order to help them search for enemies easier. Enemy attacks can also damage the player's ship, but they have to break through a regenerating shield before any permanent damage can be done. It is possible for the player to lose access to their radar and other computer systems after receiving heavy damage, in which case they must return to a base for repairs before they can be used again.

Unlike Namco's previous games for the system, which were ports of the company's Arcade hits, Star Luster was the first to be created specifically for the Famicom. It was released into arcades via Nintendo's NES-to-Arcade "Versus System." This version was released slightly later the same year (1985) with a graphically-enhanced Sharp X68000 version released almost a decade later in 1994. 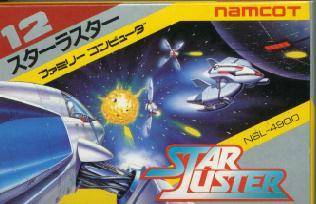